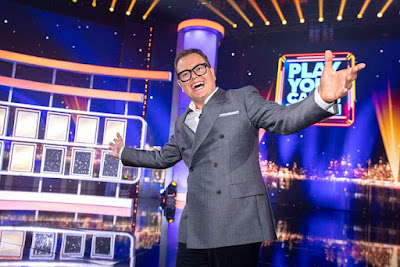 The series will see contestants hoping to win either big-cash rewards or top-of-the-range prizes. Alongside the entertaining, hilarious and nail-biting contests that viewers know and love, each episode will climax with an all-new epic endgame, bringing these iconic shows bang up to date.

From Play Your Cards Right and The Price is Right, to Take Your Pick, Strike it Lucky and Bullseye, players will be taking on each show for the chance to win some truly epic prizes.

Episode 1: Play Your Cards Right
Starting with a Play Your Cards Right Celebrity Special, Alan Carr’s Epic Gameshow promises excitement, drama, scale and big family laughs. Playing for charity, morning television stalwarts Eamonn Holmes and Ruth Langsford, comedian Chris Ramsey and his wife Rosie, presenter Ore Oduba and his wife Portia, and singer and actor Martine McCutcheon and her husband Jack McManus all take on the deck of cards, and go “higher or lower” for the chance to win the £30,000 jackpot on the turn of a single card.
Posted by JD at 14:11