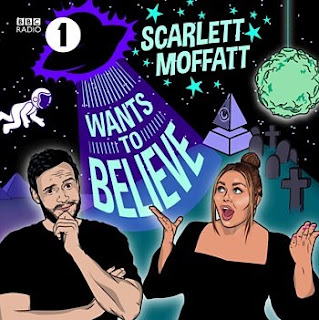 Scarlett Moffatt and her boyfriend Scott have teamed up with Radio 1 on a brand new podcast which launches on BBC Sounds on 11 May.

Conspiracy obsessed Scarlett will attempt to uncover the truth behind some of the most weird, wonderful and outright absurd conspiracy theories alongside her non-believer boyfriend Scott.

With a new episode landing on BBC Sounds every Monday, listeners can expect topics from alien autopsies and our lizard overlords to Scarlett’s personal favourite - mermaids. Each week Scarlett will be teasing out the truth to be scrutinised by Scott and celebrity guests.

Scarlett is best known from Gogglebox and being crowned Queen of the Jungle on ITV’s I’m A Celebrity… Get Me Out Of Here! in 2016. She previously presented RuPaul’s DragRace UK: The Podcast for BBC Sounds in 2019. Scarlett’s boyfriend and co-host Scott is a serving police officer.

The teaser episode will be available on 4 May on BBC Sounds with episode one launching on 11 May.

Scarlett Moffatt says: “I’m so excited to finally be able to share my Radio 1 podcast with everyone. The name: Scarlett Moffatt Wants To Believe, because it’s all about conspiracy theories. I’m absolutely obsessed with conspiracies and have been since I was a kid. I’m in my element on this podcast as we cover everything from aliens to the illuminati to mermaids. My boyfriend Scott on the other hand is definitely a ‘non-believer’ so there’s some fun arguments, sorry debates, that make for an interesting listen!”
Posted by JD at 20:05