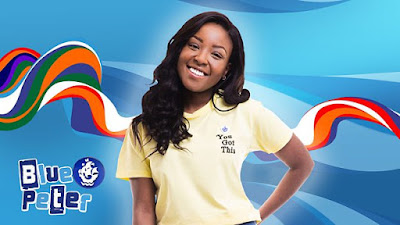 Blue Peter unveils a brand new presenter on its show tomorrow (Thursday 14 May) - but it won’t involve the usual reveal in the famous studios.

Normally a new presenter is live with the other co-hosts showcasing their first major challenge, such as jumping out of a plane or swimming with sharks, but for Mwaka Mudenda, the 39th presenter of the longest running children’s TV show in the world, the challenge will be how to ‘join’ fellow presenters Lindsey, Richie and Henry the dog without actually getting together in person.

As the presenters continue the CBBC show from their homes during lockdown, Mwaksy, as she is known, says: “There is only one word to describe being the new Blue Peter presenter and that is mind-blowing!

"Despite lockdown, I’ve felt so welcomed by the incredible behind-the-scenes team that help run and deliver such a wonderful show - and I already feel like a big part of the Blue Peter family. I’m so excited to begin my adventure, with all the fun challenges it has in store. The chance to be a part of such a well-loved programme that has such an inspiring and creative young audience is a real blessing."

Mwaksy, 25, was already working behind the scenes for BBC Sport at MediaCityUK as an assistant producer when her talent was spotted.

Originally from South London she moved to Manchester to study anthropology before getting her job at the BBC in 2018. She enjoys playing netball and often visits her family in Zambia, where she enjoys the food, people and culture. She loved Blue Peter as a child and had always wanted a badge, so is "more than thrilled" to be joining the team, even if she won’t get to meet Lindsey, Richie and Henry in person on her first show.

However, every Blue Peter presenter faces a ‘first challenge’ and, despite lockdown, this time it is no different. Mwaksy will be tasked with breaking a world record, and viewers and Mwaksy will find out what the challenge is in her first show on Thursday.
Posted by JD at 14:52