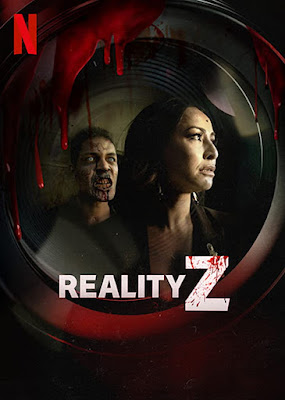 Netflix's first Brazilian zombie series, Reality Z got an official trailer this Wednesday. Set to premiere on June 10th, Reality Z is adapted and developed for a continuous series format by the award-winning Brazilian director, screenwriter and executive producer Cláudio Torres, based on the acclaimed British horror miniseries Dead Set, created by Charlie Brooker (Black Mirror). A tribute to fans of the genre, the visceral show combines British irony with Brazilian tropicalist anthropophagy, and has the city of Rio de Janeiro as the background for the story.

An ode to horror, humor and pop culture, Reality Z narrates in 10 episodes a zombie apocalypse that imprisons participants and producers of a reality show called Olympus. On one eviction night, the studio becomes a safe haven for those seeking salvation in a city where madness and horror come to reign.

In the video revealed today, it is possible to cross the walls that isolate the reality show participants from the exterior world and get to know the great self-sustaining fortress, now threatened by the zombies outside and by the vile human nature inside. Witness what other survivors are willing to do to take over the Greek-inspired palace. In addition to satire on reality shows, the series delves into what is the most profound aspect in the zombie genre: the human drama.

Reality Z is executive produced by Cláudio Torres and Renata Brandão. Cláudio also shares the series direction with Rodrigo Monte, and signs the script with João Costa. This is the first collaboration between Netflix and Conspiração, Brazilian independent producing company that has the highest number of International Emmy nominations in the market.