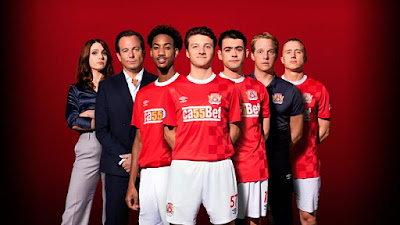 The First Team is a brand new BBC comedy from The Inbetweeners creators, Iain Morris and Damon Beesley.

The First Team, is produced by Fudge Park and written by the award-winning duo Iain Morris and Damon Beesley. This series is their first as co-writers since their massive success with The Inbetweeners series and films.

The cast also features Tamla Kari (The Inbetweeners, The Musketeers) as Olivia Talbot, Vadhir Derbez (How To Be A Latin Lover) as Carlos Velez, Phil Wang (8 Out of 10 Cats, Task Master) as Brian, and Neil Fitzmaurice (Peep Show, Mount Pleasant) as Darren.

Email ThisBlogThis!Share to TwitterShare to FacebookShare to Pinterest
Labels: The First Team