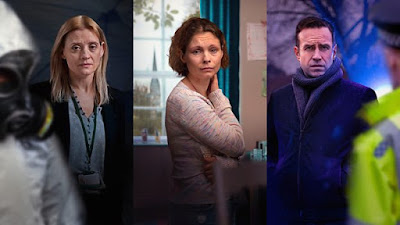 In March 2018 Salisbury became the site of an unprecedented national emergency. This three-part dramatisation focuses on the extraordinary heroism shown by the local community.

Introduction by writers Adam Patterson and Declan Lawn
At the heart of our retelling of the events that occurred in Salisbury in 2018, is a story about the internal mechanisms of a public health crisis response. It follows the work of a public servant called Tracy Daszkiewicz, the Director of Public Health of Wiltshire Council, as she works with colleagues to try to combat a lethal and invisible enemy that has appeared out of nowhere. The public health response team of which Tracy is a part instigates a lockdown. They close a local economy. They set up an elaborate system of contact tracing and testing. They source and distribute Personal Protective Equipment for use on the frontlines. And they deal, every day, with a terrified and frustrated public. They all wonder - both Tracy and the people she is trying to protect - whether life will ever be the same again. The answer, in the end, is that catastrophe forces us to look in the mirror, and to confront who we really are. After that, things are never really the same.

We arrived in Salisbury in the autumn of 2018. The nerve agent attacks on the Skripals had occurred in March, and local woman Dawn Sturgess lost her life in July, having become contaminated by nerve agent in a perfume bottle found by her boyfriend Charlie Rowley. The wounds from these events, both individual and collective, were still very raw, and we knew that there was a chance that it simply might not be right to tell this story at this time. But when we began researching individual accounts of what happened, we uncovered multiple stories of remarkable courage, resilience, and heroism. Individuals who put themselves at great risk. A community that came together in all sorts of unexpected ways to fight not only the invisible toxin in their midst, but also the fear that they all shared. We were inspired by what we were hearing, and we began to feel that now, soon after the event, was a good time to try and bring these stories to light. Internationally, the events in Salisbury had been cast as an affront to the UK, even an embarrassment. Locally though, we were hearing stories that pointed towards people at their best.

We set about contacting the people who had been most directly affected by the events. The Sturgess family, who had lost their daughter Dawn. Charlie Rowley, Dawn’s boyfriend, who almost died from his own exposure to Novichok. Detective Sergeant Nick Bailey, who was contaminated during the course of his own work and who also ended up in a fight for his life. All of them told us their stories and co-operated with the drama. We spent many hours with them, over many months, trying to get the stories right, and we feel a huge debt of thanks to them for taking part.

Naturally, we have watched the recent events around COVID-19 with fascination, because there are so many resonances with the story we tell in Salisbury. Many of the things we observed there have subsequently played out across the country.

The Salisbury Poisonings is not always an easy watch. It deals with real trauma, experienced by real people, not very long ago. So why show it now? Because it is a story of people coming together in remarkable ways, finding strength in family and community. It’s a story that reflects the internal reality of an emergency public health response, with all of its critical decisions. But perhaps most of all, because it reflects a kind of heroism that we have all come to recognise recently. A heroism that is quiet - ordinary even - and that is wrapped up in a simple sense of civic duty that we had wrongly assumed was on the wane, but that really had only been lying dormant. An everyday kind of heroism that nonetheless changes the world.
Posted by JD at 11:12

Email ThisBlogThis!Share to TwitterShare to FacebookShare to Pinterest
Labels: The Salisbury Poisonings