Bears About The House: Q&A with Giles Clark 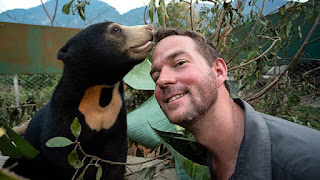 Conservationist Giles Clark is embarking on his biggest mission to date: taking on the illegal wildlife trade and helping to build a pioneering new bear sanctuary in Laos, Southeast Asia.

How did this series come about?
Matt Hunt (the CEO of Free The Bears) and I have a longstanding, 15-year friendship, and we'd talked about the possibility of me assisting him and the organisation on numerous occasions.

I hadn't been in a position to take up the offer until last year, but with the expansion of operations in Laos I took up the role of technical advisor for a 12-month period. I discussed filming my time at the sanctuary with the Natural History Unit, and what that journey would involve - for both myself and the bears.

What was your role at the sanctuary?
I was there as a technical advisor to help raise the skills and capacity of the sanctuary staff, using my experience of animal husbandry and welfare. I helped oversee the construction of new animal facilities as well as hand-rearing young and vulnerable bear cubs that needed specialist care. We worked alongside the local and national authorities to build a working relationship that would support them in their efforts to enforce and implement measures for wildlife conservation.

Why did you decide to tun your attention to bears in south east Asia?
South east Asia has always been a special place for me. It has some of the most biodiverse terrestrial ecosystems in the world which is heavily under threat. The conservation pressures and challenges that bears face of habitat loss and fragmentation, as well as the demand for the wildlife trade, is similar for most endangered species. I felt that my skills and experience could really make a difference.

What challenges did you face hand rearing vulnerable sun and moon bear cubs?
Like all small mammals that would be completely reliant on their mother at such a young age, the first challenge is making sure they not only get enough food (milk) but also the right type. This involve hours of preparation then encouraging and coaxing, cleaning up etc. You must provide an environment that feels safe and secure, both physically and psychologically.

As they gain strength and confidence the challenge is then providing them with stimulation and opportunities to allow the development and honing of their skills to become a bear. As they grow in the wild, sun and moon bears will eat hundreds of different type of food, which presents unique challenges. This means bears have complex brains and are very intelligent.

Can you tell us a bit more about the bears that are rescued and are looked after at the Sanctuary?
All the bears at the sanctuary are rescued from the illegal wildlife trade, which means they would have been born in the wild and many of them would have been present when their mothers were killed.

The cubs are then traded and kept as exotic pets, nearly always in very poor conditions. We've rescued numerous bears from these circumstances who have been kept in cages that are just a few square metres, without any stimulation or a good diet. Other bears have been rescued from the 'bear bile' trade, where the animals are kept in barbaric conditions and the bile from their gall bladder is harvested for use in traditional Chinese medicines.

Your dedication and commitment to wildlife and its protection is second to none. How does it feel like when something as horrible as the theft of bear cubs Jane and David, who we meet in the documentary, happens?
There is no way to put into words the devastation the whole team and I felt after the theft of David and Jane, and we hope that someday we will receive information that leads to their rescue again.

We're confident that the increased security measures at the sanctuary will prevent another situation like this in the future, but the incident highlights the how ruthless these individuals are, and the lengths that organised criminal networks will go to.

We'll continue to work with partners - including the Laos government - in the fight to protect and rescue bears. Since the loss of David and Jane we've rescued nearly a further 20 bears in Laos, half of which are cubs.

What do you hope viewers will take away from this programme?
I hope that the programme engages the audience to think about the way in which humanity interacts with natural world. Mary (and all the other bears and wildlife) is an ambassador, not only for her wild counterparts but for conservation in general. It's imperative that we demonstrate an understanding, kindness and compassion for the natural world and its wildlife. Bears are charismatic and endearing, they are the perfect flagship species for combatting the wildlife trade and encouraging support for conservation.

A last thought on moon and sun bears in the wild and their future……
Whilst I was based and working in Laos, we not only rescued bears but dozens of other animals from the wildlife trade. One of the great privileges I have had is to return some of these back to the wild. I can’t wait for the day when this will be possible with at least some of the bears that will be rescued in the future. Bears are vital in the their ecosystem and we owe it to them to make sure they have a future in the wild, where they belong.
Posted by JD at 13:48

Email ThisBlogThis!Share to TwitterShare to FacebookShare to Pinterest
Labels: Bears About The House, Giles Clark