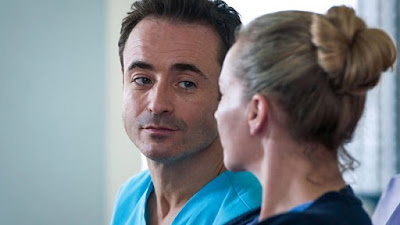 Joe McFadden will reprise his role as Raf Di Lucca and will grace the Holby City wards once again for a special episode which will air later this month on BBC One.

It may come as a surprise to viewers, to say the least, since Raf was shot… and died… in 2017.

Raf comes back to Holby in a very special way when his widow Essie (played by Kaye Wragg) continues to struggle with her cancer diagnosis and searches for answers from a comforting place.

On his return to Holby City, Joe McFadden says: “I’ll always look back on my four years on Holby with such fondness as it was one of the happiest jobs I’ve done and it was a real pleasure to get to wear Raf’s scrubs one last time in order to offer his wife Essie some guidance in such a touching episode.”

The episode will air later this month on BBC One. Holby City is a BBC Studios production.