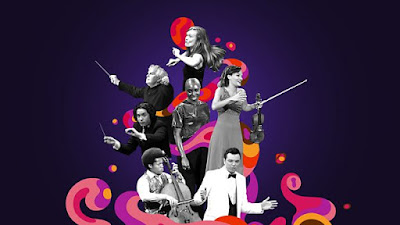 From Bernstein to Benedetti, Haitink to Hvorostovsky, Mackerras to Kanneh-Masons, musical greats, from the past and the present, are coming together in one extraordinary Proms season.
In the year that the Proms turns 125 years old, the 2020 season brings the spirit of the Proms to music-lovers at home. BBC Radio 3 and BBC Four broadcasts treasures from the past 30 years of the Proms across six weeks, before two weeks of incredible live performances at the Royal Albert Hall.
In challenging times, the BBC Proms aims to shine a beacon of hope, with its mix of seminal moments from Proms history alongside live performances from the Royal Albert Hall. The season will bring a summer of music to celebrate a wealth of talent, genres and styles, creating a line-up which brings together legendary performers from the past through its unrivalled archive, with a diverse line-up of the biggest stars of the present and future.
Posted by JD at 18:36