Rockfield: The Studio On The Farm - World TV Premiere on BBC Four on 18th July 2020. 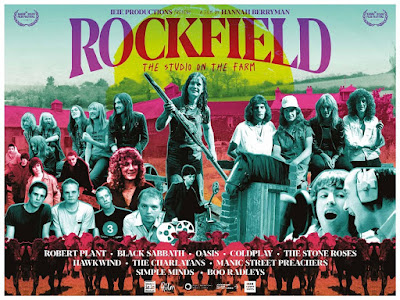 Rockfield: The Studio On The Farm, the riveting new feature-length music documentary from award-winning Welsh production company ie ie Productions, and director  Hannah Berryman (The Brick in the Wall Kids), in her feature debut, produced by Catryn Ramasut (American Interior, Queerama), is set for its World TV Premiere on BBC Four and simultaneously on BBC Wales on 18th July 2020.

Black Sabbath, Queen, The Stone Roses, Oasis, Coldplay, Simple Minds, Robert Plant, Manic Street Preachers are some of the greatest bands and musicians of our time, but what is the one thing these titans of music have in common?

They’ve all created music at Rockfield, a recording studio on a farm in Wales, run by two farming brothers who had a dream…a dream that led to Rockfield becoming the birthplace of some of the biggest hits ever made. It's where Queen recorded their seminal Bohemian Rhapsody and featured in the Hollywood blockbuster of the same name, but Rockfield’s own story has never been told…until now.

Rockfield: The Studio On The Farm features the studio’s founders, Kingsley and Charles Ward, recounting how their humble farm became the stuff of legend. They’re joined by a cast featuring some of the biggest names in rock history through the ages, from heavy metal and psychedelic rock, punk and new wave, to Madchester,  Britpop and beyond. The film takes us to this unlikely inner sanctum of rock n roll history, where songs everybody knows and loves were made, songs such as I Am The Resurrection, Wonderwall, Yellow, If You Tolerate This, to name but a few…

A starry cast, including Ozzy Osbourne, Liam Gallagher, Chris Martin, Robert Plant, Dave Brock, Jim Kerr, Tim Burgess and James Dean Bradfield, give us the inside story of their wild – and hugely creative – sessions in the middle of nowhere in Wales. The course did not always run smoothly, for the bands or the family at the helm, and the film tells the tale of struggles stuck on this isolated farm. But  maybe this was the key to creating these moments of musical genius, this isolation surrounded by awe-inspiring nature: “It’s about being a part of something way bigger than you…Very important for rock stars!” says studio front-of-house Lisa Ward. Now this slice of musical history is set to entertain from the comfort of your own home as it premieres on BBC Four and BBC Wales on Saturday 18 July 2020 at 9.15pm, it will also be available to view on BBC iPlayer.

Synopsis
This is the unlikely tale of how two Welsh farming brothers turned their dairy farm into one of the most successful recording studios of all time, producing four decades of legendary rock music.
Fifty years ago, deep in the Welsh countryside, brothers Kingsley and Charles Ward were starting out in the family dairy farming business. But they yearned to do something different – they wanted to make music. So they built a studio in the attic of their farmhouse and started recording with their friends. Kingsley’s new wife, Ann, left her job in the local bank to do the books, and they continued farming all the while. Animals were kicked out of barns and musicians were moved into Nan’s spare bedroom. Inadvertently, they’d launched the world’s first independent residential recording studio: Rockfield.

Email ThisBlogThis!Share to TwitterShare to FacebookShare to Pinterest
Labels: Rockfield The Studio on the Farm