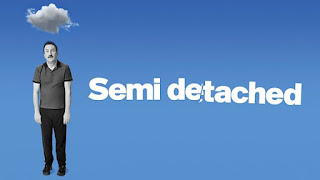 Made by Happy Tramp North and written by David Crow and Oliver Maltman, each episode of Semi-Detached (6x30') plays out in real time and is exactly like 24, except instead of following a government agent as he saves the planet, the series follows a perennial loser called Stuart (Lee Mack - Not Going Out, Would I Lie To You?) as his life goes down the pan in a suburban cul-de-sac. Each episode of Semi-Detached will give viewers an incredibly fast moving, half-hour window into Stuart’s world.

All Stuart wants is a quiet life as a wedding DJ but his family seems to have other ideas. On top of barely coping with a (much younger) partner April (Ellie White - Stath Lets Flats, The Other One) and a new born baby, Stuart also has to look out for his jailbird brother Charlie (Neil Fitzmaurice - Peep Show, Mount Pleasant) and his promiscuous, drug-taking Dad Willie (Clive Russell - Happiness, Game Of Thrones). Then there’s the ex-wife Kate (Samantha Spiro - Sex Education, Grandma’s House), who lives across the cul-de-sac with their teenage daughter Madonna (Sarah Hoare - Chewing Gum, Black Mirror) and Kate’s husband Ted (Patrick Baladi - The Office, Stella) who thinks he’s better than Stuart because he sells fish to sushi restaurants. 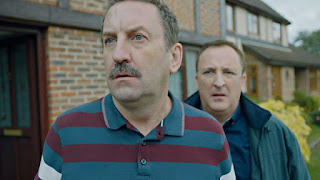 Interview with Lee Mack (Stuart)
What can you tell us about Semi-Detached?

I think mid-life crisis is the way I’d look at it, his age has never been specified so I have to assume he’s my age because he looks like me, and I’m 51. He’s pretty pathetic I think. What makes this show unusual is that 99 percent of the time the camera is following my character around. It’s all real time. If I walk down the stairs the camera follows me. In a normal sitcom, if I leave the bedroom they’d just have the next shot of me being over the road, but on Semi-Detached the camera follows me down the stairs, out the door… everything is real time.

Are there any challenges about filming in real time?

The main challenge is that I’m in every single scene. I think there was one scene, the only time in the whole series, where the camera follows someone else. I’m not in every shot so sometimes it’s cut between different characters, but my character is in every scene. I used to complain that actors say ‘I’m tired’ but now I’m like, ‘I’ll keep my mouth shut when actors complain it’s tiring.’

I’m lucky because in Not Going Out I write it, so I turn up and know all the words already, suddenly I had to remember all these lines which I hadn’t written which sounds really obvious but that’s not what I’ve done in the past. This time I had to be a proper actor. Well, I’ll let the viewers decide that!

How did you get involved with the series?

He’s got his own production company and he sent me the script, I think more out of, ‘What do you think?’, and I said, ‘Not only do I really like it, but I want to play the part of Stuart’. So I got involved with trying to get it made, went to the BBC and just said, ‘I’d really like to do this, I think it’s a great script and I’m keen to start doing some acting in other people’s projects , not just my own.’

I’m very lucky I get a lot of offers to do things, but not in the acting world, that’s the bit where I’m not on that list or part of that world. I want to do more of that so this was my opportunity, I really liked the script, I liked the character and no one had the part yet. Before you know it we’ve made a pilot and they liked it and booked a series.

Is it different to not be writing?

Absolutely. I’ve spent the last fifteen years writing my own sitcom, every episode I write with someone, and it’s so labour intensive. Most of my work life on that show is the writing, probably 90 percent of the hours is writing it, not actually performing in it. So to let go of that and let someone else do that is both great and a bit of a challenge. I had suggestions for scripts and I came up with ideas but only a small amount. I loved letting go.

I always try and remember something Jack Nicholson said which is if he has a choice between doing what the director says or doing what he thinks is right, he’ll tend to come down on the side of doing what the director says because he likes letting go and relinquishing control. The problem with stand-up and being yourself is you end up with so much control. On Would I Lie To You? I say whatever I want because it’s my mouth, or in Not Going Out, I can put whatever words I want into my mouth because I write the scripts with someone else. But on this, someone else is making the decisions and the danger of me getting too involved is I’d be saying what I would do as a performer in the situation when the whole point is to play someone else.

How would you describe your character?

Pathetic is probably the best way.

I’m from a background of stand-up and basically playing and being myself, even in Not Going Out which is my main acting thing I’ve done in the last ten years, it’s a version of me. It’s not a massive leap, shall we say, to do Not Going Out. But for this, this was the first time I’ve ever inhabited another character to any great length and Ben Palmer, the director, was constantly saying to me, ‘Back foot’. Every time we’d do a scene, he’d say, ‘Can we do it again, you need to be more on the back foot’ and it got to the point where I was literally leaning on my back foot!

Everything Stuart does is apologetic, guilty or feeling like he’s to blame or is responsible, he’s basically just trampled on by everybody and lets it happen. That’s the way his life has ended up the way it is, everyone around him telling him what to do and blaming him. One of the most used words in the script is “Stuart!” with an exclamation mark.

In the new series, Stuart and April are parents, how are they finding it?

Stuart’s not coping very well, he’s clearly been lumbered with most of the work. The new series starts with April coming back from a weekend in a health spa because she felt she needed a bit of me time.

The more you learn about her the more you realise that she gets a lot of me time while Stuart is left looking after the baby, as well as trying to hold down a job. He’s taken the role of a stay at home dad and as we see in the show, he’s struggling to get it all together. On top of all that, he feels like his relationship is breaking down. He’s doing everything he can to prove he can cook her a nice meal. There’s a threat that she might not stay with him and that’s what we deal with in the first episode of the series, which isn’t great as the baby is only a few months old and already April is questioning the relationship.

What was it like working with the other cast?

They really were an amazingly good cast. I was surrounded by people that are far more experienced actors than me, especially in the world of comedy acting. I was nervous, I turned up thinking, ‘Can I do this? These guys are much, much better than me,’ and they were brilliant.

Each individual character is so well defined and that’s what I love about it. I basically go round introducing all these characters, so I run across the road and introduce my ex-wife played by Sam Spiro, and she’s such a funny character. She’s now an MP and you just question how they were ever together as she’s so opposite to Stuart. She’s trying to make something of her life and Stuart is just a pathetic DJ who hasn’t really got the dress sense to be with her, let alone the personality. Then her new husband Ted, who’s played by Patrick Baladi, and he’s Stuart’s arch enemy. But he’s so funny with the way he plays it and off camera he’s just forever trying to have a laugh. He’s really good fun to be with on set, same with Sam, so was everyone on set. It was just a really good laugh, Ellie was brilliant too, as was Clive Russell. There wasn’t one person who wasn’t a good laugh. They’re all actors who didn’t take themselves too seriously, that’s the way I felt being with them.

It’s something I’m very keen to do as it’s not traditionally what I’ve been about. Most of my work comes from me being myself as a host or stand-up, but this is an area of life I’m trying to get involved in.

I made a decision a few years ago and said to my agent I’d like to start doing more acting. I’ve been very lucky as I always wanted to be in Doctor Who and I got a part in Doctor Who, I got a part in Horrible Histories the movie and I did a bit on National Treasure. I’m certainly interested in more dramatic roles, I think comedy-drama is the way I’d describe what I’d like to do more of. I’m working on something at the minute with the Dawson Brothers who are great, it’s a little project we’re trying to get going but it would be comedy-drama.

Email ThisBlogThis!Share to TwitterShare to FacebookShare to Pinterest
Labels: Semi-Detached