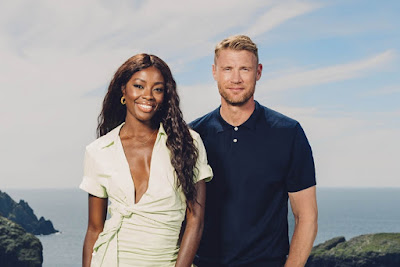 ITV today revealed the twelve celebrities taking part in the challenge of a lifetime, to row the entire length of Britain, in its brand new, epic adventure series Don’t Rock The Boat.

The 5 x 60 minute series will see twelve famous faces step out of their comfort zones and onto their sea legs as they compete in one of the toughest shows ever filmed on both land and sea.

Taking the helm are sporting legend and Top Gear presenter Freddie Flintoff and The Voice’s AJ Odudu as they present the series and guide the celebrities through each leg of the race on the water and preside over the colossal coastal challenges on land.

Freddie Flintoff said, “I'm thrilled to be hosting this brand new show for ITV. It sounds like it's going to be a huge challenge for the twelve rowers so I'm pleased that I'll be spending most of my time on dry land...hopefully! It should be a great watch for everyone at home and I can't wait to get started.”

AJ Odudu added, “This is going to be a great show, with an epic line-up. Such a brilliant mix of personalities and challenges which always makes for good telly. I personally cannot wait to get going - especially filming with the legend that is Freddie Flintoff. We’re going to have so much fun! Bring it on!”

Don’t Rock the Boat (produced by South Shore) will push the twelve celebrity, split into two teams of six, to their physical and mental limits as they battle it out to complete over 500 gruelling miles. The two teams will also face a series of jaw dropping on-shore challenges to secure vital advantages over their opposition.

Immersed in the coastal beauty of the UK the celebrities will face the waves and wind of the sea legs and the daunting cliffs and gorges of Britain’s spectacular shoreline.

Each will have to call on all their individual reserves and team resources to conquer this ‘oar-inspiring’ challenge.

Don’t Rock The Boat will appear on ITV later this year.
Posted by JD at 13:55

Email ThisBlogThis!Share to TwitterShare to FacebookShare to Pinterest
Labels: Don’t Rock The Boat