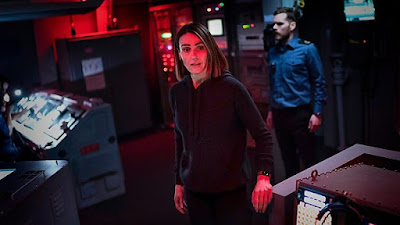 A first look image has been released for BBC One’s new thriller Vigil, made by World Productions and starring Suranne Jones, Rose Leslie and Shaun Evans.

The image, featuring Suranne and Shaun in character as DCI Amy Silver and Chief Petty Officer Elliot Glover, was taken earlier this year before production was paused in line with Covid-19 guidelines. Filming resumed on the six-part series earlier this week near Glasgow.

Vigil is written and created by Bafta-nominated writer Tom Edge (Judy, The Crown, Strike) with episodes by Ed Macdonald (The End Of The F***ing World) and Chandni Lakhani (Dublin Murders). The fictional drama is directed by Bafta-winner James Strong (Broadchurch, Vanity Fair, Liar) and Isabelle Sieb (Shetland, The Athena).

The mysterious disappearance of a Scottish fishing trawler and a death on-board a Trident nuclear submarine bring the police into conflict with the Navy and British security services. DCI Amy Silva (Suranne Jones) leads an investigation on land and at sea into a conspiracy that threatens the very heart of Britain’s nuclear deterrent.

Together with independent health and safety consultants, in full consultation with industry partners, and in accordance with all current government guidelines, the Vigil production team will adhere to comprehensive production protocols to ensure that the series is produced in a safe and responsible manner during this time of global pandemic.

Vigil is produced by Angie Daniell (Alex Rider, Clique), executive produced by Simon Heath (Line Of Duty, Save Me, Bodyguard) and Jake Lushington (Born To Kill, The Bletchley Circle) for World Productions, Gaynor Holmes for the BBC, James Strong and Tom Edge.
Posted by JD at 15:37

Email ThisBlogThis!Share to TwitterShare to FacebookShare to Pinterest
Labels: Vigil