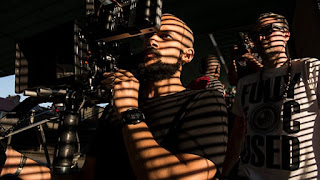 PRU is a comedy about a group of teens struggling to navigate adolescence in a Pupil Referral Unit, a school for excluded children.

This brand new Comedy Slice will authentically capture the unpredictable nature of PRU life, a world seldom seen by the public. It will be told through the eyes of four beautifully complex but seemingly self-destructive kids who say the unsayable and do the undoable.

The four teen leads will be found through an open casting process which will begin this week with Fully Focused putting out an online call for talent on its social pages.

Fully Focused are a youth-led production company at the forefront of online content creation. They are committed to centring underrepresented young voices in their work and the entire team behind PRU, from the writers (Alex Tenenbaum and Nathaniel Stevens) to the director (Teddy Nygh) have extensive experience of working with a wide range of young people, including in Pupil Referral Units, giving PRU unrivalled authenticity.

Shane Allen, Controller Comedy Commissioning at the BBC, says: “This script crackles with terrific dialogue from sharply drawn characters in a world we haven’t seen before in sitcomworld - all imbued with truth, heart and hilarity. Fully Focused bring their ethos and emphasis on authenticity and representation of young voices both on and off camera and we’re excited to go on this journey with them.”

Leah Henry, Executive Producer, says: “Fully Focused are incredibly excited to be working with Shane Allen and his team to produce PRU for BBC Comedy. This show will take BBC audiences into the world of the Pupil Referral Unit, looking past the stereotypes of kids who can’t behave and showcasing the wit, charm, frenetic energy and beautiful chaos of young people from all walks of life, we’re also looking forward to unearthing fresh new talent through the open casting call. Created by a team who know this world inside out, developed with our young creatives aged 18-25 years old and providing paid training positions for young people throughout production, PRU is as genuine and authentic as it gets.”
Posted by JD at 15:55