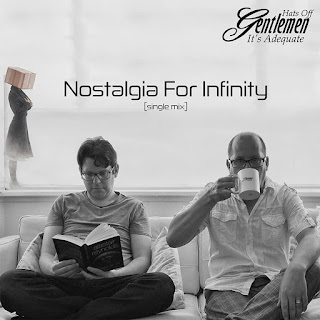 The song was inspired by Welsh science fiction author and former astrophysicist Alastair Reynolds’ Revelation Space novels. In this universe, humanity has fractured into competing factions defined by their relationship with technology, but all threatened by the Inhibitors, ancient machines aiming to preserve life in the long run, by destroying civilisations that become too intelligent. Nostalgia For Infinity is named after the spaceship which becomes fused with its captain through the effects of the Melding Plague. As ship and captain progressively merge, it becomes architecturally more unpredictable and organic. The ship/captain, equally plagued by guilt at his past actions, withdraws from contact from his crew. The song is sung from the perspective of a character persuading the elusive captain to re-engage with humanity, by acting as an ark to preserve the species from the Inhibitors.

You don’t want to know what you could do,
You’d keep yourself to ghosts if you could,
Chose to come to life what could you do?

Nostalgia For Infinity, look at you.

The dripping walls are listening in,
I know you’re there,
You’re showing me,
There’s a part of you that still wants to be seen.

It won’t make me forgive you, it’s not up to me to forgive you,
But there’s no redemption anyway for anyone
We’re all flawed all broken, I’m sorry if you don’t approve,
But I did what I thought I had to do, I let you thaw and spread
Don’t now withdraw, I’m talking to you.

Nostalgia for Infinity, look at you.

Hats Off Gentlemen It's Adequate are Malcolm Galloway (vocalist, multi-instrumentalist and producer) and Mark Gatland (bass, backing vocals, keyboards and co-producer), on their own, or with Kathryn Thomas (flute). Kathryn is the flautist of the award winning BBC New Generation Artists The Galliard Ensemble (wind quintet). Their music is eclectic, combining progressive/alt-rock, classical, experimental, electronic, and metal influences. They were recently highlighted as Prog Magazine Limelight feature artists. They are based in London, UK.
Posted by JD at 10:40

Email ThisBlogThis!Share to TwitterShare to FacebookShare to Pinterest
Labels: Hats Off Gentlemen It's Adequate