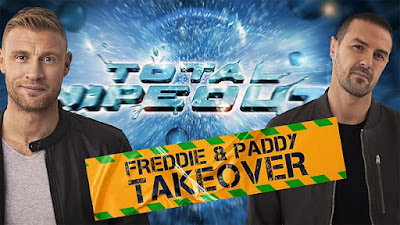 Freddie Flintoff and Paddy McGuinness bring their unique banter to classic Total Wipeout episodes as plucky contestants take on the Big Red Balls for the chance to win £10,000!
Coming to BBC One from Saturday 8 August at 7.10pm.

Can you tell us a bit about what to expect from this new series of Total Wipeout?

I think most people have seen Wipeout before - I remember watching it and it’s just fun isn’t it? You’ve got people doing stuff on this water place which is just ridiculous; you don’t stop laughing at it. It’s hard! Some of the stuff people go through, from getting punched off a wall to falling on them big red balls, all to win ten grand! This time round it’s the best episodes from 10 years ago and then me and Paddy have done the voiceover.

I’ve seen a few people saying they're introducing it to their kids for the first time over lockdown, so hopefully it’s good timing?

I think a lot of things have been tried over the years… but nothing's been as good as Wipeout! Hence bringing it back, and even watching the old episodes, it just doesn’t date. It’s still very funny. It’s fun, there’s a bit of jeopardy and it’s quite hard so hopefully it’ll go well and who knows - they might make it again!

Were you excited to get involved and to be working with Paddy again for this project?

I’m never excited to work with Paddy! It’s interesting isn’t it, because the two of us are doing Top Gear now and we’ve so much fun on that and it’s so good to do. And then we got the chance to do Wipeout and for both of us it was a no brainer. We both know the show. It’s quite strange you’ve got one from Preston, one from Bolton doing all these shows now - long may it continue!

Have you always been a fan of the show and what are your memories of watching it?

It was really bizarre watching. Obviously you see the big red balls and you remember all those things, but there was a person on it when I watched the series and it’s a friend’s daughter! There was a cricketer in the 80s and early 90s called Alan Lamb, he had a big moustache, bit of a character, and I know Alan and I know his daughter. And she was on! I remember at the time watching and saying, “Oh it’s Lamby’s daughter!” I was in the voiceover studio and we were doing that episode so I’m commentating and talking about someone I know, 10 years on. So that was a bit different.

Does one of you play good cop and the other bad cop when commenting on the contestants? What type of contestant do you root for?

A little bit, we tend to get behind a few people – there are some characters! When they were filming, it’s almost as if some of the contestants weren’t aware it’s being filmed! Some of the things they do, some of things you can get people to do on the start line, or doing a little piece to camera to introduce themselves is amazing. I'm not sure if people would do that now! But yeah it’s bizarre, Paddy gets stuck into a few people, as do I to be honest!

Have there been many funny moments whilst recording together? Does the other person have any habits that get on your nerves or have the separate recording booths helped?

Yeah I think separate booths are good…but this has been fun. There’s a team of people behind it and there's people writing scripts and that…but there is a lot of room where you can just talk and riff with each other. And sometimes you’re just falling about laughing.

Did you have a favourite contestant across the series?

Katie (Lamb), yeah she was definitely mine. She was a standout!

It seems like there is a great mix of fun contestants in there?

Yeah some of the dances people do and some of the things people say, it’s bizarre! If they do it again they should get all the same people back.

Which obstacles would particularly suit you and which would you fail at on the Wipeout course?

The easiest one is when you get onto the course you just slide down but after that it’s all hell. It’s all balance, it’s bouncing, it’s jumping. I think the only one I might have a chance with is that wall where they punch you, just trying to stay on the wall. I think that’s the only one, but then if anyone saw me boxing, they’d probably disagree.

Do you have any special rituals you do before a recording / do you have a routine together now as you’ve worked together for quite a while?

No Paddy never sees what I do before we start because he’s always late! So whatever I do, Paddy’s oblivious, and then Paddy waltzes in and then just starts as if we’ve got the call time wrong. So there’s no warm ups, there’s no nothing, we’re just sat there waiting for Paddy and then he comes in and we start.

He keeps you on your toes. So that's the warm up?

No not on our toes, he keeps us frustrated!

Will either of you have a catchphrase for the show?

What other shows like Wipeout do you feel bring a good mix of comfort and silly watching?

I think it’s on its own Wipeout. I did a show called Cannonball a few years ago which was water based but it just wasn’t Wipeout.  And then you’ve got your Ninja Warriors, I present that in Australia. But that's become more of a sport over there, it’s so difficult and it’s so hard and it’s for people who just spend their life in the gym training. But with Wipeout it’s fun and you can have a go at it. I think that's the charm of the show where people sit at home thinking, “I’d love to do that” or “I could do that” and they genuinely could do and they’d enjoy it. I don’t there’s too many shows out there like that.

How do you hope audiences will react to the show?

Do you know what, everyone that I’ve spoken to when they mention Wipeout and that me and Paddy are doing it, they’re excited by it. They just reminisce about Wipeout and they've all got a memory of watching so hopefully we’re starting from a good point and it’s going to be similar to when it first went around. You’re sat in the voice booth watching it and apart from probably a few outfits and a pair of trainers it hasn’t dated - maybe a haircut here and there - but you wouldn’t know. I hope everyone will get into it.


Quickfire round on your co-host:

What would Paddy’s biggest strength and biggest weakness be?

His biggest strength would be that he’s really competitive. His biggest weakness is that his ambition outweighs his ability.

What nickname would he have?

You know the cartoon character Foghorn Leghorn? He just shouts. That’s who Chris (Harris) likens him to. I’m going to throw Chris under the bus here, so Chris reckons he’d be Foghorn Leghorn!

What would be the first thing he’d spend his money on?

He’d probably get some more trainers with studs on the back or a new denim jacket. Or he loves a leather jacket as well Paddy – he doesn’t really dress age appropriate bless him!

Were you excited to get involved and to be working with Freddie again?

There was a great response when the news was announced so I really hope people enjoy seeing it back on BBC One. We need those big red balls back in our lives! The show, not Fred?

What do you think makes this format so popular with viewers?

Wipeout is all about not taking yourself too seriously and going for it. It’s silly, pure comfort TV and I think more than ever that’s the kind of telly people have an appetite for.

Have you always been a fan of the show/what are your memories of watching it?

I’ve always loved the mix of contestants that take part in the show - they’re up for anything and aren’t afraid of looking daft, bit like myself and Fred. I think the brilliant thing about it is you can’t really prepare for the course or the obstacles – you have to leave your pride at the door and give it your all! It brought back loads of happy memories watching it, felt really nostalgic.

Which one of you plays good cop/bad cop when giving commentary on contestants? What type of contestant do you root for?

I can probably be a bit harsher on some of the contestants than Fred. I see it more as tough love.

Do you have any special rituals you do before a recording/ do you have a routine together now as you’ve worked together for quite a while?

Fred still has a lot to learn from me so part of that routine is him getting the chance to sit back and watch a professional at work. But really it’s always fairly easy for us to get stuck in and get the job done while having a laugh.

What would be your 3 top tips for tackling the Total Wipeout course?

My tips would be, don’t be self-conscious, don’t over think it and definitely try to get in swimming practice beforehand as most people end up stuck in the water at some stage or another!

How do you hope audiences will react to the show?

I hope that it’s one parents introduce to their kids and that it gives people the chance to sit down and have a laugh together. For anyone that’s seen before, it’s nostalgic and it’s actually even funnier and more ridiculous than I remembered.

Quickfire round on your co-host:

What would be their strength as a contestant?

His biggest strength would be his ability to stride across the big red balls with ease.

What would be their biggest weakness as a contestant?

His biggest weakness would be getting not being able to maintain his blue steel look for the entire course.

What would they do with the prize?

Use it to pay for the dry-cleaning bill.

What nickname would they have?

Freddie Falloff? The Lanky Lancastrian. So many to choose from really!
Posted by JD at 15:48