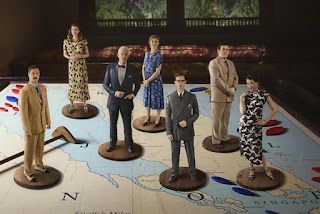 An epic story set during World War Two, The Singapore Grip focuses on a British family living in Singapore at the time of the Japanese invasion.

Award winning actor, David Morrissey (The Missing, Britannia, The Walking Dead) takes the role of ruthless rubber merchant Walter Blackett, who is head of British Singapore’s oldest and most powerful firm alongside his business partner Webb played by Charles Dance OBE (Game of Thrones, And Then There Were None).

With Webb’s health failing, Walter needs to ensure the future of their firm is secure. He decides Webb’s son Matthew is the perfect match for his spoilt daughter Joan (Georgia Blizzard). Matthew’s idealism leaves Walter increasingly suspicious as Matthew himself falls under the spell of Vera Chiang (Elizabeth Tan), a mysterious Chinese refugee.

Episode 1
For rubber baron Walter Blackett and his family, 1941 Singapore is full of wealth and privilege, and the horrors of war-torn Europe a distant whisper. With his company’s silver jubilee approaching, Walter looks to consolidate his power as his elderly partner, Mr Webb, moves further into retirement. With the issue of his legacy to consider, Walter must decide where to place his trust; in his wilful daughter Joan and the apple of his eye, or his son Monty, a reckless liability. But their world is rocked by the arrival of Vera Chiang, a mysterious Chinese dissident, seeking their aid.

Email ThisBlogThis!Share to TwitterShare to FacebookShare to Pinterest
Labels: The Singapore Grip