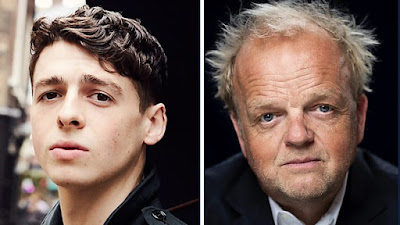 Filming has begun on BBC Two's Danny Boy (working title), a compelling new drama produced by Expectation about a young man's journey from medal-winning war hero to alleged murderer, and his search for truth in the fog of war.


Anthony Boyle (Ordeal By Innocence, The Plot Against America) plays real-life soldier Brian Wood, accused of war crimes in Iraq by the human rights lawyer Phil Shiner, played by Toby Jones (Marvellous, Detectorists).
The two men go head to head in a legal and moral conflict that takes us from the battlefield - at so-called Checkpoint Danny Boy - to the courtroom, and one of Britain's biggest ever public inquiries, the Al-Sweady Inquiry.
Produced by Expectation for BBC Two, the feature-length single is written by Bafta-winner Robert Jones (Murder, Party Animals).
The drama richly explores the effect Brian's experience has not just on him, but also on his family. This includes his father and ex-soldier, Gavin, played by Alex Ferns (Chernobyl, The Batman), and his wife Lucy, played by Leah McNamara (Normal People, Vikings).
Memory, evidence and trauma collide, as Brian finds himself caught on the fine line between war and unlawful killing. After his service in Iraq and years of legal investigation, will he ever be able to look his family in the eye again and be the husband, father, and son, they need him to be?
Danny Boy (w/t) is an urgent and thought-provoking drama that questions what we ask of those who fight - and kill - for their country.
Anthony Boyle says: "I'm thrilled to be working with Sam Miller on Robert Jones' phenomenal script, and telling Brian's extraordinary story. We get to explore not just the realities of war, but how they can come back to haunt you."
Toby Jones says: "Robert has written an extraordinarily compelling, intelligent and nuanced script, and it's a real honour to be working with Danny Boy's exceptional cast and creative team to bring it to the screen."
Writer Robert Jones says: "Here's a man who won a medal for valour, but whose toughest test was the scrutiny that followed. External scrutiny, and soul searching too - Brian Wood's story is a fascinating one for a writer to explore. It's been a great privilege to work with producers of such distinction and I'm really delighted we're going into production with Sam Miller at the helm and a terrific cast and crew."
Director Sam Miller adds: "I'm very excited to be telling this story featuring the Battle of Danny Boy and the subsequent fallout, both personally and politically, for Brian and others.
"The film is a candid and subtle delve into a troubled sequence in recent history that sets up an undertow threatening all those involved. The intimate questions raised about the nature of soldiering and the political ramifications are never more prescient. I'm personally extremely pleased to be working with BBC Two and Colin and Sue's team at Expectation, and a wonderful cast headed by Anthony Boyle, Toby Jones, Leah McNamara and Alex Ferns."
Sue Horth and Colin Barr, executive producers for Expectation say: "Robert's script is a razor-sharp examination of one of our most urgent and morally challenging questions: when is killing an act of war and when is it an act of murder?
"The story of Colour Sergeant Brian Wood and human rights lawyer, Phil Shiner - who accused him of war crimes - goes straight to the heart of that question and it's an incredible honour to be able to tell it. Bringing it to life for BBC Two with Sam and Simon and an amazing cast only adds to that sense of privilege."
Patrick Holland, Controller of BBC Two, says: "Robert Jones' exquisite script plunges us into a world of profound ethical complexity, exploring one man's experience as he moves from decorated war hero to one suspected of war crimes. The team at Expectation has attracted a stellar cast and crew and I couldn't be more excited about the film they will produce."