Filming begins on the 22nd series of Midsomer Murders 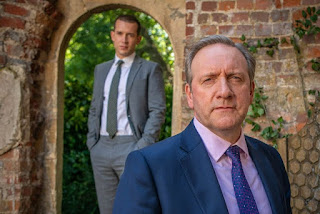 A spate of bizarre deaths will occur across middle England as filming begins on a new series of the much-loved ITV detective drama Midsomer Murders.
Neil Dudgeon returns to play DCI John Barnaby for his 10th year in the role, Nick Hendrix is back as DS Jamie Winter and Annette Badland resumes her role as pathologist Dr Fleur Perkins. Midsomer Murders is made by Bentley Productions, part of ALL3Media and is the UK's top-rated drama export.
Also returning to film the 22nd series is Fiona Dolman as Sarah Barnaby followed closely by Paddy the dog as the Barnaby's faithful canine companion. Guest cast for the first film includes Amanda Abbington (Sherlock), Mark Williams (Father Brown) and Maimie McCoy (Van Der Valk). Further guest casting to be announced.
This series follows Barnaby and Winter as they investigate an urban myth becoming a murderous reality, a post-operative heart rehabilitation club whose members' dreams of a second chance at life are cut short, a murder mystery weekend, a twisted scarecrow festival and an amateur dramatics company with deadly secrets.
Executive producer Michele Buck says:
"We are very pleased ITV has asked us to produce more Midsomer Murders. We will have our signature mix of tantalising mysteries, wonderful guest stars and stunning locations while also maintaining a safe working environment for all our cast and crew in these current challenging circumstances."
Neil Dudgeon adds:
"Everyone is excited to get back to work. Sadly there won't be as much hugging and kissing on set as usual but we've all got to make sacrifices! It's bound to be a bit strange at first with all the safety protocols but hopefully we can all keep each other safe and shoot another great series."