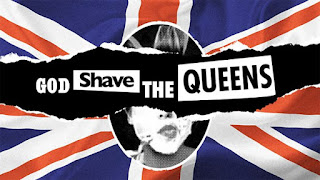 The acclaimed cast of RuPaul's Drag Race UK return to BBC Three this November in God Shave The Queens.
Following on from the phenomenal success of RuPaul's Drag Race UK, BBC Three will drop the exclusive eight part boxset, God Shave The Queens to BBC iPlayer.
This mid-form, fly on the wall docu-series gives viewers a chance to reacquaint with the much loved cast of RuPaul's Drag Race UK. Fresh from their Drag Race debut, it follows the vibrant queens as they take on the next biggest ride of their lives, performing live on their first ever Drag Race UK tour. Hosted by Drag Race legend Alyssa Edwards, the tour carries The Vivienne, Baga Chipz, Divina de Campo, Cheryl Hole, Blu Hydranga, Sum Ting Wong, Vinegar Strokes, Scaredy Kat, and Gothy Kendoll to packed arenas across six cities, from Newcastle to London, Birmingham to Manchester.
The series picks up only a few days after The Vivienne was crowned the UK's First Drag Race Superstar, with the queens in rehearsal. They are working on big, highly choreographed numbers and individual performances that showcase their individual talents from circus skills to killer moves, high octave ranges to comedy capers, and power ballads to pure drag glamour. The girls are riding high on the love of RuPaul's Drag Race UK and the high jinks, fun, and sisterly camaraderie is plain to see. Viewers will be delighted to have the chance to take a genuine look behind the curtain and get know the UK queens even more. We meet some of their closest celebrity friends, partners and also get to join them for a big night out! God Shave The Queens allows Drag Race fans to see their favourite queens in a whole new light.
The Drag Race UK tour is a gruelling one and big characters jostle for shoulder pad space. For some, the stage isn't their natural habitat, choreography isn't their thing, organisation skills don't come easy, and when sickness hits the cast can they recover to serve a sickening tour?
Come on and join the party as we go onstage, backstage and behind the scenes as our cameras capture all the goings on between your favourite UK queens. Here comes the drama, mama! God Shave The Queens (8x23') follows the queens through the good, the bad, the sickness and the madness and BBC Three will be the only place to exclusively view it in the UK.
RuPaul says: "I'm so delighted to send my first court of British queens out to the four corners of the realm - spreading their message of light, love and laughter, and sharing their sweet sensitive souls with the people."
Posted by JD at 14:23