Interview with Hugh Laurie who plays Peter Lawrence in Roadkill 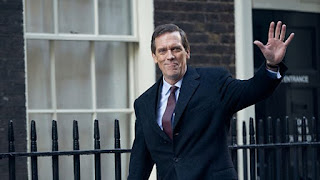 Tell us about your role.

I play a character called Peter Laurence who is a Conservative cabinet minister. He begins the story at mid-cabinet level as Transport Secretary and has ambitions to move up the greasy pole. The story is in some regards about the price he is prepared to pay to get to the top position and the price that he forces everyone else to pay, principally his family, but also those who pledge their loyalty to him.


He is a man who is relatively free of the gravity of guilt and whose life mission is to keep moving forward and not to look back. It sounds as if the story is entirely about me - it isn't. There are three or four different stories interlocking in different places with different hopes or dreams being realised or dashed.
Where do we meet Peter Laurence?
When we first join Peter Laurence he has just escaped the jaws of failure at the very least. He has taken the unusual step of suing a newspaper in a libel case, which is generally speaking something that politicians don't do, or are not advised to do, and certainly the political establishment do not approve of them doing it. He's a confident fellow and is confident in his ability to talk himself out of a jam.
Could you tell us about some of his key relationships?
He has a complicated life. His job demands a certain degree of loyalty to the Prime Minister, but he has a long and stable marriage to his wife Helen, played by Saskia Reeves, and they have a genuine fondness for each other and a genuine pride in their two daughters. They are childhood sweethearts and have taken quite a journey together. It subsequently turns out that Peter is also carrying on a liaison with another woman whose life was in a state of desperation until he extended a hand of friendship and support which turned into something romantic.
Then there's Iain De Caestecker (Duncan) who is a very sharp lieutenant to have at Peter's side. They are in it together. They aren't quite like Butch and Sundance - there's no gun play and no car chases!
Tell us about the script and David Hare's writing.
It's been enormously enjoyable to say David Hare's words and also to work with the cast that's been assembled for this. I wouldn't be here without David Hare - he wrote what I think was the first film I was ever in, called Plenty. I think I had three lines but it meant spending a week in the company of Meryl Streep, and blimey! That was entirely because of his support and enthusiasm which I have tried to repay and failed.
David has a different way of looking at people and listening to people. Some of which has some of that jaggedness and awkwardness that I find so much more believable and intriguing.
How would you describe Roadkill, in a few sentences?
Roadkill is a political drama about the price of success in the political realm and what it demands of the people who do it, and those around the person who does it. It's pretty unforgiving.

Email ThisBlogThis!Share to TwitterShare to FacebookShare to Pinterest
Labels: Roadkill