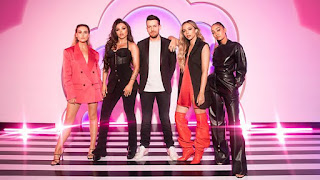 Global superstars Little Mix are creating six different bands to follow in their footsteps and become the next global superstars. The winning band will join them on their next UK tour.
Chris Ramsey is set to host the live shows of the brand new entertainment show Little Mix The Search which is currently airing on BBC One.
The critically acclaimed stand-up comedian and award-winning podcaster will be appearing alongside global superstars Little Mix as they search for incredibly talented singers to become members of bands.
Little Mix The Search continues on Saturday nights on BBC One and BBC iPlayer.

How does it feel to be the host of this exciting new show?
Well, it came in three stages really. I was absolutely over the moon to be asked to do the show initially. Then I went to do the photoshoot with the girls and my excitement went to the next level. Then, I got sent all of the audition episodes and I literally can't wait now! It's such a great show and the girls are so passionate about the bands. It's really going to blow people away.
Do you think being a stand-up will help your hosting skills?
Oh, absolutely. It helps you think on your feet as I've had almost everything imaginable thrown at me (literally and figuratively). I cut my teeth in some of the roughest comedy clubs in the UK when I was starting my career… then again, I've never had to wrangle the biggest girl band on the planet, so we'll see!
When did you first meet Little Mix?
I am from the same town as Jade and Perrie but we actually didn't meet until I did a panel show with them all. We have bumped into each other a few times since, the Royal Variety performance being one of them. Having three people from South Shields on that stage at the Royal Albert Hall meeting Prince Harry might be a record for the town. Surely worthy of a blue plaque!
What has it been like working with Little Mix so far?
An absolute pleasure. I was very worried about the photoshoot as I hate having my photo taken at the best of times, let alone alongside actual real life pop stars! But they were an absolute delight and were very complimentary about what I was wearing and how I looked. So, lovely girls… fantastic liars.
What's your favourite Little Mix song?
Black Magic. But they've got an absolute catalogue of tunes.
If you were to audition for the show, which category would you audition for and what would you sing?
If I were to audition for the show, I would have been laughed out of the room. I am tone deaf and barely scarped through to the Strictly semi-finals, I have all the rhythm of a cold sausage roll.
What's your go-to karaoke song?
I never do karaoke. I'd clear the place out.
Who is your musical idol?
I'm a massive 80s fan. So, anyone from that era really. Particularly John Parr, Elton John, Phil Collins. Legends.
Are there any rituals or techniques you do to help nerves that you might use before heading out for the live shows?
I've never given myself any kind of ritual because I know that if I ever once forgot to do it, I would probably nose dive a perfectly good performance halfway through when I realised.
What's the best advice you've received in your career so far that you'd pass onto the contestants?
It would probably be, 'Make sure your routines have a load of little punchlines in them on the way to the big final punchline so that it's not just one long boring story' but I'm not sure how helpful that will be to the bands!
What qualities would you say someone needs to make it in the entertainment industry?
You've got to be hardworking, grateful, eat sleep and breathe the thing you're trying to achieve and you have to have a bit of luck too.
After competing in Strictly last year, would you say that helps you empathise with the contestants competing on this show?
Absolutely. Standing waiting to do any kind of performance is nerve wracking at the best of times. But live on BBC One with millions of people watching and knowing you will be judged on it afterwards… it's another level. And I knew I couldn't dance so I was never really that bothered. But this is these guys dream, so I can't imagine what they will be going through.
Are you going to be watching Strictly this year?
I'll have to record it, as I'll be a bit busy on Saturdays with Little Mix The Search! But I'll be rooting for Jamie (Laing).
What do you think makes Little Mix The Search stand out from other talent competitions?
I think the fact that the girls have been on the other side of the process themselves and are literally one of the most successful products of these shows, ever, gives the show a really authentic feel. And as soon as you see the way they interact with the guys auditioning, you can just tell that they really care about them. It's not just a conveyor belt of contestants failing for our amusement.
Will Rosie and your son, Robin be tuning in?
Rosie will be coming to some of the live shows as she is a huge Little Mix fan, and I'm sure Robin will be at home completely ignoring the TV while I'm on it, like he always does.
What can audiences expect when they tune in?
They can expect laughs, tears, suspense, joy, heartbreak and everything in between. Oh, and some incredible performances!