McFly share their story in McFly: All About Us 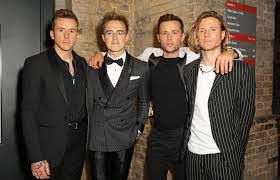 McFly share their story in McFly: All About Us
ITV has commissioned a one-off special charting the story of McFly. Transmitting this November, the one-hour show will feature the band's most open interviews to date and culminate in a very special gig, filmed at the Union Chapel in London in front of their families who have been their constant support through the years.
Featuring intimate and emotional interviews with Tom, Danny, Dougie and Harry, they will talk candidly about the origins of McFly, the formation of McBusted and the truth behind the band taking a break that until now they haven't felt ready to share.
With never before seen footage from key moments throughout their career, and refreshingly honest conversations with one another, viewers will be taken inside their journey giving a portrayal of the highs and lows the band has seen professionally and personally. From their heady rise as teenage pop stars to achieving seven number ones, appearing in a Hollywood movie and winning a Brit Award, selling over 10 million records worldwide through to unexpectedly taking a break. McFly will bring their story up to the present day that sees them back on track following group therapy, a triumphant reunion gig at the O2 and the release of their first album in 10 years.
McFly commented: "This is the true and open story of our band and our friendship, the challenges we've faced as well as highs we could never have dreamt of and why we're stronger now than ever."