The new HOW presenters are… 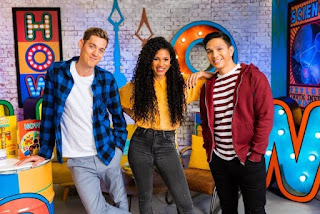 Following the news of the return of the iconic children's television show HOW, the presenting team are now revealed with Vick Hope, Sam Homewood and Frankie Vu in front of the camera along with a welcome back, for Fred Dinenage.
Produced by Terrific Television (TT), the new series will be shown on CITV and simulcast on ITV from November and available on ITV Hub.
Vick (The X Factor), Sam (Scrambled), Frankie (Disney Channel) and Fred bring a mix of freshness, experience and familiarity to HOW's target audience.  Nic Ayling and Driana Jones, Founders of Terrific Television, say the line-up of presenters brings together a great team worthy of the HOW brand, which occupies a unique place in children's television.
Vick Hope - As backstage presenter and of ITV's The X Factor 2019, Vick Hope will be known to HOW's young audience. A former Capital Breakfast presenter, she has also presented Crufts, The Voice UK, Trending Live, FYI Daily on ITV2 and was a contestant on Strictly Come Dancing in 2018.  A multi-talented TV and Radio presenter, Vick is also a journalist and published author.
Sam Homewood - As well as presenting numerous programmes for adults, Sam is a familiar face in children's television.  He fronts ITV's CITV flagship kids weekend breakfast show, Scrambled and presented Use Your Voice Live – an online campaign to encourage young people to vote in the last election.
Frankie Vu - An obsessive sports fan, tech geek and music lover. A live sports presenter and regular on CBBC and Disney XD, he is your go-to guy for playful, intelligent TV presenting. Frankie appeared on Disney Channel US, taking audiences behind the scenes on the sets of the latest Disney blockbusters in Movie Surfers.
Fred Dinenage MBE – Television presenter, broadcaster and author Fred has earnt himself status as a UK national treasure having celebrated his 50th anniversary as reporter/presenter with ITV in 2014. Fred has presented the regional news for ITV in the south for 36 years and been a TV Presenter non-stop for 56 years.
Fred is part of the fabric of HOW and will be the only presenter to have appeared on all three versions of HOW. Fred has been a household name Co-Presenting ITV Meridian since 1993 and presented programmes including Tell the Truth, Pass the Buck, World of Sport, Gambit and appeared on Tiswas.