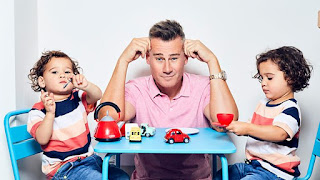 The Likely Dads is a new, frank and funny series of conversations about parenting from the perspective of fathers, hosted by broadcaster, former Blue Peter presenter and father to twins, Tim Vincent.


Tim has undertaken many challenges throughout the course of his life - from painting Blackpool Tower and snow survival training with the army in Norway, to flying in Tornado jets and running the New York marathon. His latest challenge - being the middle-aged father to two-year-old twin boys.
Host Tim Vincent says: "The Likely Dads is a place where men can muse, pontificate and share humorous stories. The series shows that men can be good parents as well as sobbing emotional wrecks when it comes to their children. Not all is harmony and agreed opinions, there's a sharp divide and judgment on your preference of Bing versus Peppa Pig. Either way the show will make you laugh, maybe spit out your tea and hopefully have you nodding silently in agreement."
Sioned Wiliam, Radio 4's Commissioning Editor for Comedy adds: "Hearing these dads chat, let off steam and share the funny side of parenting makes for a really enjoyable and interesting listen whether you're a parent or not."
Joining Tim as regular panellists will be award-winning comedians Russell Kane and Mick Ferry. Guests across the series include actors Chris Bisson (East Is East, Shameless, Emmerdale), Craig Kelly (Queer As Folk, Titanic) comedians John Thomson, Prince Abdi, Che Burnley, Scott Bennett and Laurence Clarke, health and wellbeing coach Mr. Motivator and more.
In the first episode Chris Bisson recalls approaching fatherhood like his acting roles: "This kid malarkey, I thought I'll just do a bit of research, learn my lines and I'll be able to deal with it. Of course, none of that is true and they throw the most unexpected things at you."
In a regular feature, the programme asks the children of one of The Likely Dads a series of questions to determine which of them knows their children better - and vice versa. Chris' four year old daughter Ella is asked how old her dad is, her response: "He's not very old, 800 maybe?"
Across the series The Likely Dads and guests cover topics such as parenting at different ages, education, holiday mishaps, keeping children entertained and much more.
Thursday 29 October
The Likely Dads
23:00-23:30
BBC Radio 4