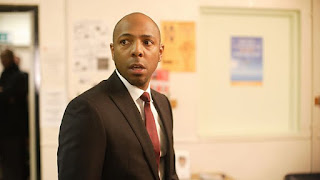 Don Gilet reprises his role as one of Walford's most notorious bad guys and will to return to E20 later in the year.
Don Gilet will surprise the residents of Albert Square with his return as the murderous Lucas Johnson later in the year, set to turn Denise Fox's world upside down again. First arriving to Albert Square in 2008 when his daughter, Chelsea, tracked him down, they discovered he'd found Christianity after a troubled past with addiction. Rekindling their relationship, Lucas was the picture-perfect family man, until Denise and Lucas got engaged and things took a menacing turn…
Lucas' holier-than-thou façade began to slip when his left his ex-Trina to die, with Denise's ex-Owen tragically also becoming collateral damage in a memorable episode ending in Denise and Lucas exchanging vows… with the bride unaware that the monster within her new husband had truly been awoken. When Denise found out the truth, Lucas' scheming went to another level and after framing her for the murders, he faked her suicide. Whilst the rest of the Square mourned, in what became one of Walford's biggest twists; it's revealed Lucas had been keeping Denise hostage in the derelict basement next door. With the full extent of his heinous crimes revealed, Lucas was arrested. Never one to pass up an opportunity to torment Denise, Lucas' most recent appearance in 2016 saw her visit him in prison with Patrick in tow. The Priest turned serial killer was adamant he is absolved of his sins, but Denise demands that he never contacts her again.
Now after four years of relative peace, Lucas' return to EastEnders is set to cause shockwaves amongst Albert Square residents. Has the villain really seen the error of his ways and changed during his time inside?
Of his return to EastEnders, Don Gilet says: "I'm thrilled and honoured to be asked to breathe life once again into such a complex, controversial and divisive character but, most importantly, to have another opportunity to work alongside one of the UK's finest actors, Diane Parish. I feel blessed."