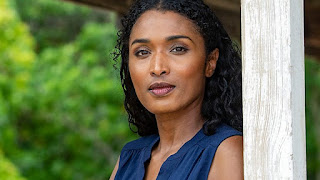 Look who's back! To mark the tenth anniversary of BBC One's hugely popular Death in Paradise, Sara Martins will reprise her role as fan favourite, D.S. Camille Bordey, for a surprise return to the show when it airs in early 2021.
To celebrate a decade of one of the most loved British crime dramas, Sara will appear in a special two-episode story. Returning to Saint Marie for the first time since her departure, Camille is thrown into an ongoing investigation involving her mother, Mayor Catherine Bordey. Catherine's life is turned upside down when the death of a friend pulls her into grave danger. How will the case unfold, and will we see old acquaintances reunited?
Sara Martins says: "There are some characters that never leave you and I'm still Camille, wherever I go. After many years, people still reference and send their love to me as Camille, so it was obvious that I had to go back and the 10th anniversary is the perfect opportunity! I want to celebrate the longevity of Death in Paradise. It was life changing for me and I'm so grateful to the show. I feel like I'm going back home with new folks and old, to bring more fun and joy. I'm really happy to wear Camille's "twinkly-ness" again."
Sara joins series regulars Ralf Little as D.I. Neville Parker, Don Warrington as Commissioner Selwyn Patterson, Tobi Bakare as Sergeant JP Hooper, and Elizabeth Bourgine as Mayor Catherine Bordey.
As well as the usual baffling murders, intriguing puzzles and famous guest stars, it was announced earlier this year that Josephine Jobert will return as D.S. Florence Cassell, and Tahj Miles will join as a new member of the team in the shape of wayward 19-year-old turned promising police recruit, Marlon Pryce. How will the old guard take to new blood in the police squad?
Renowned for its weekly episodes of clever whodunnit murder mysteries against a stunning Caribbean backdrop, Death in Paradise remains one of television's highest-rated dramas since its launch in 2011.
Red Planet Pictures Executive Producer, Tim Key says: "When we were planning our tenth series, we knew we wanted to treat the audience to some massive surprises, and welcoming Sara back to the show after six years is one of the best.  It's a joy working with her again and we can't wait for the audience to see what's in store for Camille.  Seeing her filming on the beach in Guadeloupe was one of my favourite moments this series, and the really cool thing is that there are still more surprises to come!"
Red Planet Pictures have worked closely with industry bodies, other production companies and the BBC to develop a detailed Covid-19 protocol policy, implementing various safety measures including social distancing, face coverings and temperature and Covid-19 testing to minimise any risk of infection. There is also a full-time Covid-19 Supervisor on set to make sure the protocols are being implemented correctly and the latest guidance is incorporated into the policy. The health and safety of the cast and crew is paramount and production is working in line with the Guadeloupe advice as well as the industry guidelines.
Death in Paradise is a Red Planet Pictures production for BBC One made with the support of the region of Guadeloupe and internationally distributed by BBC Studios. Series ten is produced by Jim Poyser and Tommy Bulfin is executive producer for BBC One.