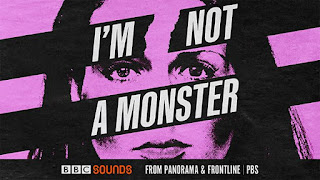 In 2016 journalist and host Josh Baker narrowly survived a suicide bombing. While he was recovering, he got a tip-off about another story. It was the beginning of a four year journey to understand the truth about Sam Sally, an American mum who left behind a comfortable life and travelled to the heart of the Islamic State group caliphate with her family. Her husband became an ISIS sniper, her 10 year-old son, Matthew, appeared in an infamous propaganda video threatening President Trump.

From the depths of Raqqa's infamous torture prison to an elk hunt in Idaho, Baker takes listeners on a dangerous journey where nothing is as it seems, ultimately revealing a mother's path from Indiana to ISIS and back.
Investigative journalist and host Josh Baker says: "I've worked on a number of investigations into westerners who've joined ISIS, but this one proved to be like nothing I've experienced before.
"It's a privilege to let Matthew tell his story as an American boy who was forced to appear in ISIS's infamous propaganda. And for the first time bringing the two journalistic forces of BBC Panorama and Frontline PBS together to put their collective weight behind a global tale that's explored across two films and a 10 part serialised podcast, allowing the audience to go deeper into this extraordinary story and follow the investigation every step of the way."
I'm Not A Monster unearths the truth about the American mother who took her kids into the heart of the ISIS caliphate — and what happened when they came back.
The case of Sam Sally is also investigated in an upcoming Frontline (PBS) documentary, as well as in the UK on BBC One's Panorama.
The I'm Not A Monster podcast is produced by the combined team including Emma Rippon (BBC), Joe Kent (BBC) and Max Green (Frontline PBS). The podcast was commissioned by Dylan Haskins and Jason Phipps (BBC Sounds) in collaboration with Raney Aronson and her team at Frontline (PBS) and Karen Wightman and Rachel Jupp at BBC Panorama.
The I'm Not A Monster series trailer is available now on BBC Sounds and pbs.org/frontline.
Episode one of I'm Not A Monster will be available Monday 23 November.
The Panorama film Return from ISIS: A Family's Story is on BBC One at 9pm UK on Monday 23 November 2020. The Frontline (PBS) film Return from ISIS will air on PBS at 10pm ET on Tuesday 15 December.