First look image arrives from the outskirts of outerspace for brand new Sky original drama, Intergalactic, landing on Sky One and NOW TV in 2021 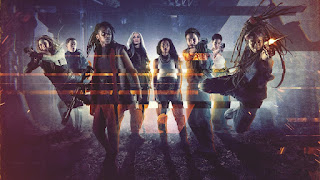 
The first look image give viewers a taste of what to expect from this high octane drama from Eleanor Tomlinson (Poldark), Thomas Turgoose (This is England), Sharon Duncan-Brewster (Rogue One: A Star Wars Story, Sex Education), Natasha O'Keeffe (Peaky Blinders, Misfits), Savannah Steyn (The Tunnel, Wannabe), Oliver Coopersmith (Tin Star), Imogen Daines (Black Mirror), new comer Diany Samba-Bandza (Jack Ryan), Parminder Nagra (Bend It Like Beckham, ER) and Craig Parkinson (Line of Duty) against the backdrop of the galaxy.
Written by award-winning showrunner, Julie Gearey (Prisoners' Wives, Cuffs, Secret Diary of a Call Girl), the series tells the story of fearless young cop and galactic pilot, Ash Harper (Steyn), who has her glittering career ripped away from her after being wrongly convicted of a treasonous crime and exiled to a distant prison colony. But on the way there, Ash's fellow convicts stage a mutiny and seize control of their prison transfer ship. With the flight crew dead, mob leader Tula Quik (Duncan-Brewster), is intent on reaching the free world – Arcadia – with her gang; and Ash is the only pilot who can get them there. Ash is forced to join them on the run towards a distant galaxy and an uncertain future. From the fringes of outer space to the depths of human emotion, Intergalactic is a drama set in space, but with its feet firmly on the ground.
Posted by JD at 16:28