ITV commissions a second series of Rolling In It 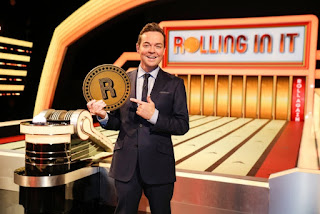 ITV has commissioned a second series of the popular game show, Rolling In It.
Produced by Over The Top Productions, the gameshow proved a hit with viewers and was regularly the most watched show of the evening attracting a peak audience of 4.2 million.
Presented by Stephen Mulhern, three contestants play alongside some of their favourite celebrities in a bid to go home with a big cash prize, but they need to have luck on their side because everything could change on the roll of a coin.
Three teams - made up of the player and their celebrity partner - have to roll a coin down a moving conveyor belt towards slots which are labelled with large cash sums to win, but they must avoid the dreaded 'Bankrupt' slots which mean the player loses everything.
As the game progresses, the money values get larger, but so do the penalties. The roll of one final coin determines whether the contestant leaves empty handed or goes home 'Rolling In It.'
Stephen Mulhern said: "I thoroughly enjoyed making this series and I am delighted that the viewers loved it as much as I did and that we will get the chance to do it all again.  I can't wait to get started."
Posted by JD at 09:33