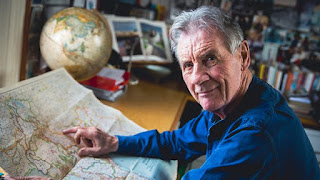 Following the huge success of his latest BBC Two travel docu-series, Michael Palin will return to screens once more this December for a bonus Christmas special of Michael Palin: Travels Of A Lifetime, focusing on the travel series Himalaya.


Last month, BBC Two's Michael Palin: Travels Of A Lifetime drew an average of 2.7m viewers per episode, and saw Sir Michael revisit his travel journals, diary entries and reveal his personal untold story from his most iconic travel shows - Around The World In 80 Days; Pole To Pole; Full Circle; Sahara.
In this brand new 1x90 special, Michael will be turning his attention to Himalaya, an astonishing journey of discovery that Michael made in 2004, at 60 years of age.
For years, the Himalayas represented one of the ultimate tests of exploration. In this series, Michael tests himself against them, venturing through India, Pakistan, passing through the shadow of Mount Everest, the Tibetan Plateau and Bhutan.
Michael Palin, says: "For me, the word Himalaya evoked the spectacular, the beautiful and the downright dangerous. It's a name everyone had heard of, but most people, myself included, didn't really know. Since I was a boy reading about the adventures of Hillary and Tensing, the Himalaya had been one of those epic destinations that seemed more mythical than real.
"I wanted to find out about the people who lived in and around the roof of the world. To see how the mountains affected their lives, and shaped their cultures and beliefs. To discover the realities of life in lesser-known lands like Bhutan and Nepal. And to immerse myself in one of the most awe-inspiring landscapes on Earth. In the end, the journey exceeded all my expectations. I'm greatly looking forward to revisiting it."
Iain Scollay, Executive Producer, says: "It's thrilling to see how Michael Palin: Travels Of A Lifetime resonated so well with its audience, and to see viewers return week after week to accompany Michael on his journeys. We thought it was only right to take one more trip down memory lane, with an adventure that was possibly one of the biggest challenges he faced throughout his career."
Beejal Patel, Commissioning Executive for the BBC, says: "We hope viewers will be taken with this bonus instalment of Michael Palin: Travels Of A Lifetime just in time for Christmas, as they have been with the rest of the show. During a time when global travel presents such a challenge for us all, this series has allowed us to embark on a round the world adventure with television's most loved TV traveller."