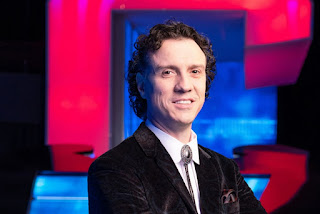 ITV's The Chase unveiled its sixth Chaser - Darragh 'The Menace' Ennis.
Darragh joins the award-winning series' formidable quizzing pros Jenny 'The Vixen' Ryan, Shaun 'The Dark Destroyer' Wallace, Mark 'The Beast' Labbett, Anne 'The Governess' Hegerty and Paul 'The Sinnerman' Sinha.
Dubbed 'The Menace' by host Bradley Walsh, Darragh, 40, is an Oxford-based scientist who hails from Dublin. His Chaser attire sees him sport a velvet paisley print jacket and bolo tie.
He previously appeared on the show as a contestant, facing Paul in 2017.
Of turning Chaser to join the smash hit series, Darragh said: "I'm so pleased to be the sixth Chaser. It's brilliant to be on such an amazing quiz team, and so much fun working with Bradley Walsh. It's such an exciting opportunity and I can't wait to take on more contestants!"
Host Bradley Walsh added: "Another Chaser? ANOTHER CHASER? That's another person cleverer than me on The Chase. I must have words with the producers. But I can't wait to educate Darragh on the important things in life; custard creams, cowboy films and real ale."