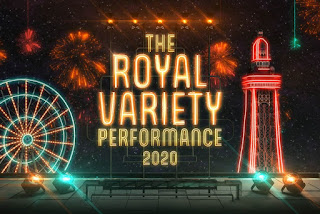 Jason Manford to Host this Year's Royal Variety Performance in Blackpool
Comedian, actor and singer Jason Manford is to host The Royal Variety Performance at the historic Blackpool Opera House in the Winter Gardens Complex. His Royal Highness The Prince of Wales will deliver a special message to the charity and the artistes performing in the show, as he looks forward to this exceptional evening of entertainment.
Returning to the North after nine years, the show promises to be an unforgettable evening of exceptional performers, world class British theatre and superb comedy, plus some exciting surprises.
2020's stellar line-up includes the inspirational and much-loved Captain Sir Thomas Moore who captured the nation's hearts with his fundraising efforts during the pandemic. He will be joining forces from his home for an exclusive performance with legendary singer and entertainer Michael Ball who will be on stage at the Opera House with the NHS choir to perform their chart-topping anthem 'You'll Never Walk Alone'. Plus a special solo appearance by British superstar Gary Barlow.
The evening will also herald the welcome return of musical theatre with an exclusive performance from the award-winning Sheridan Smith as Cilla in the heart-warming and spectacular Cilla The Musical and a mesmerising exclusive from Frozen the Musical starring leading lady Samantha Barks.
There's more music from Brit Award winner and rising star Celeste, singer and Spice Girl Melanie C and high energy choreography from the eternally popular Steps.
Magic from much loved TV presenter Stephen Mulhern, a phenomenal performance from West End sensation Marisha Wallace as well as a high octane and jaw-dropping performance from Kenyan acrobats The Black Blues Brothers.
Also taking to the stage with a specially composed and heart-warming performance, musical comedian and Britain's Got Talent 2020 winner Jon Courtenay. Plus more comedy from stand ups Jo Caulfield and Daliso Chaponda.
Jason Manford said: "After appearing at the Royal Variety Performance three times since 2009, it is an honour and a privilege to be hosting the show this year. It's been a hugely difficult year for everybody, so I hope that for a couple of hours on a cold Winter's night in Blackpool, we can take people's minds off things and do what us Brits do best; have a laugh.
The event is staged in aid of the Royal Variety Charity, whose patron is Her Majesty The Queen. The money raised from the show helps those people from the world of entertainment in need of care and assistance.
The star studded spectacular will be screened on ITV in December.