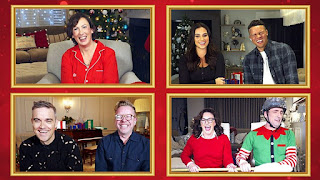 This Christmas, three celebrity couples will join Miranda from the comfort of their own homes for a virtual raucous night in of festive games and challenges. The celebrities are Strictly Come Dancing's Head Judge Shirley Ballas and her partner Danny Taylor, football pundit and presenter Jermaine Jenas and his wife Ellie, along with singer-songwriter and entertainer Robbie Williams and his drummer Karl Brazil. Viewers can also expect another mystery celebrity special guest who will be joining in on the fun and mayhem.
An expert in the art of homemade mischief, Miranda Hart says: "I'm very excited for the lovely BBC One viewers to see the ridiculous games my guests threw themselves into on this new Christmas show. It certainly brought me many laughs; I'm still giggling now. And not just any guests either - some of our most beloved famous faces. All shall be revealed, and indeed much was!"
Miranda's Games With Showbiz Names (1x30) is produced by Monkey, which is part of NBCUniversal International Studios, a division of Universal Studio Group for BBC One. It was commissioned by Kate Phillips, Acting Controller BBC One and Jo Wallace, Acting Controller Entertainment Commissioning. The Commissioning Editor is Syeda Irtizaali. Executive Producers are Andy Charles Smith and Will Macdonald for Monkey. Miranda's Games With Showbiz Names is an iteration of the Celebrity Game Face format, which is created by Critical Content and distributed globally by NBCUniversal Formats, also a division of Universal Studio Group.