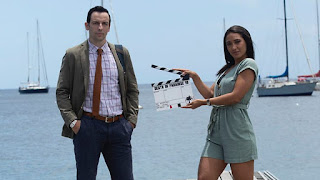 The 10th anniversary series of the much-loved Caribbean crime drama, Death In Paradise, is once again awash with talented guest stars who join series regulars Ralf Little, Joséphine Jobert, Tobi Bakare, Don Warrington and Elizabeth Bourgine as well as newcomer, Tahj Miles. The star-studded series is due to air in early 2021 on BBC One.
Produced by Red Planet Pictures, the milestone series features a host of famous faces including comedian and actor Jason Manford (Ordinary Lies), Gbemisola Ikumelo (Famalam), Kelvin Fletcher (Emmerdale), Luke Pasqualino (Our Girl), Patrick Robinson (Sitting in Limbo), Danielle Vitalis (I May Destroy You), Laura Aikman (The Split), Steve Edge (Benidorm), Luke Bailey (Noughts + Crosses) and Lia Williams (The Crown). Tobi Bakare's real-life wife, Prisca Bakare (BBC's A Midsummer Night's Dream) also stars as JP's on-screen wife Rosey, who is heavily pregnant with twins.
Further stars who'll be gracing our TV screens for this momentous series include:
Eleanor Fanyinka (Masters of Love)
Richard McCabe (Poldark)
Franc Ashman (I May Destroy You)
Bryony Hannah (Call the Midwife)
Faye McKeever (Des)
Jim Caesar (Grantchester)
Adrian Schiller (The Last Kingdom)
Niamh Cusack (The Virtues)
Shalisha James-Davis (Alex Rider)
Delroy Atkinson (Luther)
Sean Gilder (His Dark Materials)
Lewis Reeves (I May Destroy You)
Kellie Shirley (In the Long Run)
Karen Bryson (Shameless)
Tim Key, Executive Producer of Death In Paradise said: "We're delighted to announce our amazing guest cast and particularly grateful to them all for making the journey to Guadeloupe during such a difficult year to be part of the show. Every episode features some amazing performances from a host of famous guests who were all a pleasure to work with and we can't wait for our viewers to try to work out which one of them dunnit!"
Filmed on the idyllic French-Caribbean island of Guadeloupe, the tenth series sees D.I. Neville Parker continue to get to grips with island life whilst attempting to unravel a series of challenging cases with the team. Some surprises for the new series have already been announced, including the return of fan-favourites Joséphine Jobert and Sara Martins but viewers can expect plenty more exciting things to come!
Renowned for its ingenious murder mysteries set against a beautiful Caribbean backdrop, Death In Paradise remains one of television's highest-rated dramas since launching in 2011. Series 10 is set to be one of the biggest and best yet.