ITV commissions a new adaptation of H.E. Bates’ novel, The Darling Buds of May, entitled The Larkins 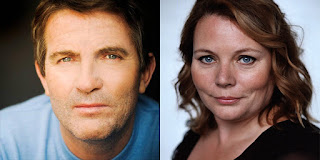 The Larkins is a new television adaptation of H.E. Bates' novel The Darling Buds of May, written by acclaimed screenwriter Simon Nye (Finding Alice, The Durrells, Men Behaving Badly) with the aim of capturing the warmth, optimism and escapism of The Larkin family for a modern generation.  Abigail Wilson (Trollied, Carters Get Rich, Stella) writes one of the episodes.
Screenwriter Simon Nye said:
"The novels are short, hilarious and magical. We will be expanding the Larkins' world a little and can't wait to immerse ourselves in this glorious countryside idyll."
The comedy drama will be produced by Objective Fiction, Genial Productions and OMG Scotland with executive producers, Ben Farrell and Charlotte Lewis for Objective Fiction, Sophie Clarke-Jervoise and Simon Nye for Genial Productions and Toby Stevens for OMG Scotland. Bradley Walsh is also an executive producer.
The book and its sequels were last adapted 30 years ago as The Darling Buds of May and became one of ITV's all time highest rated television comedy dramas winning critical acclaim and audience approval.
Commented Bradley Walsh on his casting as Pop Larkin:
"I'm thrilled to be asked to be part of this much loved and iconic series of stories. The warmth and affection that H. E Bates has generated through his books is so uplifting and I cannot wait to be part of the Larkin family. It'll be a hoot!"
Commented Joanna Scanlan on her casting as Ma:
"What better comfort could there be from all we have endured this year than the rolling laughter and outsize hugs of Ma and Pop? It's going to be an honour to help bring The Larkins to the nation's devices!"
Set in the late 1950's, The Larkins is the story of a working-class family led by the golden-hearted wheeler dealer Pop Larkin and his wife Ma, together with their six children, including the beautiful Mariette.
Fiercely loyal to each other and their community, each Larkin family member has a strong work ethic, alongside a disinterest in authority.
The series has been commissioned for ITV by Head of Scripted Comedy, Nana Hughes.  Commissioner Chloe Tucker will also be overseeing production on behalf of the channel.