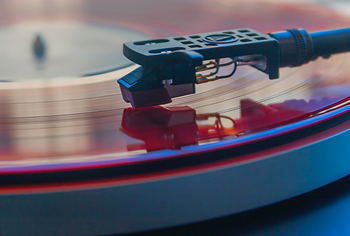 New figures released by record labels' association the BPI using Official Charts Company data will show that alongside continued growth in streaming, which now accounts for around 80% of UK music consumption, sales of vinyl LPs and audio cassettes surged ahead in 2020. Fans turned to their favourite music in ever greater numbers to escape the lockdown blues, the figures will show.

There has never been so much choice in terms of how to discover, access and enjoy music. Most fans turn to the immediacy of streaming for much of their daily listening, but increasingly they complement this by collecting much-loved albums on vinyl, CD, download and even on cassette. Record labels work with their artists to provide this choice by releasing music across digital and physical formats and by licensing their artists' work to hundreds of different music services.
Vinyl gets the high five
Nearly 5 million (4.8m) LPs were purchased in the UK over the past 12 months – a leap of nearly a tenth on sales in 2019 and a 13th consecutive year of growth since 2007. Vinyl LPs now account for nearly 1 in 5 of all albums purchased (18%) and are at their highest level since the early nineties. Vinyl generates almost twice as much in industry revenues as music video streaming platforms, such as YouTube, despite the tens of billions of videos watched every year.
Among the titles expected to be announced as the year's best sellers by the Official Charts are classic LPs by iconic artists such as Rumours by Fleetwood Mac, who in 2020 celebrated their 50th anniversary, Oasis's (What's The Story) Morning Glory?, Amy Winehouse's Back To Black and Nirvana's Nevermind. New studio albums have also done very well, including Harry Styles' Fine Line, Kylie Minogue's Disco, AC/DC's Power Up, and Ultra Mono by IDLES – the follow up to the 2019 Hyundai Mercury Prize shortlisted album Joy As An Act Of Resistance.
Vinyl LP sales initially dipped during the first lockdown but by September they began showing positive year-to-date growth for the first time. Campaigns such as LoveRecordStores, Tim's Twitter Online Listening Parties (both in March), Record Store Day (postponed to June but with extra events), The Record Club and National Album Day (in October) helped to rally fans in support of indie record shops, specialist chains and the artist community.
Geoff Taylor, Chief Executive BPI, BRIT Awards & Mercury Prize, said: "In a year when all our lives have changed, music's power to inspire has never been more evident. The immediacy and convenience of streaming make it the go-to audio format for most of our listening, but more and more fans choose to get closer to their favourite artists and albums on vinyl.
"It's remarkable that LP and audio tape sales should have risen at all given the challenges we've all faced. The surge in sales despite retail closures demonstrates the timeless appeal of collectable physical formats alongside the seamless connectivity of streaming."
The BPI will report its final music consumption figures on January 4th 2021.
Predicted best-selling vinyl albums for 2020 (Based on YTD Official Charts data)
Fleetwood Mac – Rumours
Oasis – (What's The Story) Morning Glory?
Amy Winehouse – Back To Black
Nirvana – Nevermind
Harry Styles – Fine Line
Kylie Minogue – Disco
AC/DC – Power Up
Queen – Greatest Hits
IDLES – Ultra Mono
Arctic Monkeys – Live At The Royal Albert Hall
Cassettes reel in the fans


Though still only a fraction of overall recorded music, cassettes, typically released in limited edition format, now come as standard on many album releases. Final figures based on Official Charts data for 2020 will be confirmed on 4th January, but it is projected that around 157,000 tapes will have been purchased in the past 12 months – double the total of the year before and the highest amount since 2003, when 243,000 tapes were sold and Now 54 was the year's biggest seller on the format. This would mark an eighth year of consecutive growth for the format, which is finding a new market among music enthusiasts of all ages who value its retro, collectable appeal.
Among the most popular titles released on cassette in 2020 were Lady Gaga's Chromatica, 5 Seconds Of Summer's Calm, which to date is the year's fastest-seller, Yungblud's Weird, and The 1975's Notes On A Conditional Form. Other artists to have reeled in the fans on the format include South Korean all-girl pop band Blackpink, Selena Gomez, Dua Lipa, Haim and not forgetting Kylie, whose 80s inspired Disco was a particular highlight of the year across all three main physical formats.
Predicted best-selling cassette albums for 2020 (Based on Official Charts data)
Lady Gaga – Chromatica
5 Seconds Of Summer – Calm
Yungblud – Weird
The 1975 – Notes On A Conditional Form
Blackpink – The Album
Selena Gomez – Rare
Kylie Minogue – Disco
Dua Lipa – Future Nostalgia
Haim – Women In Music Pt III
The Streets – None Of Us Are Getting Out Of This Life Alive
SOURCE BPI