A Discovery of Witches Season 2 Preview 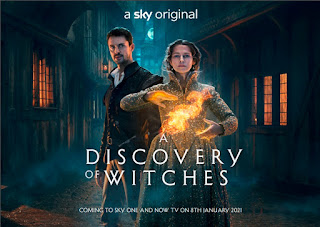 The second series of A Discovery of Witches sees Matthew and Diana hiding in time in the fascinating and treacherous world of Elizabethan London. Here they must find a powerful witch to help Diana master her magic and search for the elusive Book of Life. Enemies are everywhere, the threat to witches is growing, and Matthew and Diana’s romance faces a barrage of new threats – from within as much as without. Diana’s unleashed magic takes a dark and frightening turn, while Matthew struggles to re-inhabit the dangerous life he led over four centuries ago. They must overcome deep personal fears and jealousies, baring their darkest secrets to one another if they are to stay alive, stay together and find a way back to the present day.

Back in the present, their reappearance is keenly anticipated. Diana’s beloved aunts, Sarah and Em, must take shelter with notorious witch hunter Ysabeau de Clermont at her ancestral home, Sept-Tours. Meanwhile, in Oxford, Marcus and Miriam take on Matthew’s mantle to protect daemons Nathaniel and Sophie, whose pregnancy is advancing. If news that her baby is a witch reaches their enemies on the Congregation, the consequences could be catastrophic. And Gerbert and Knox are determined to hunt down every clue they can as to Matthew and Diana’s disappearance, and the secrets their allies are keeping from them. Danger is closing in on all sides, not least in the form of a vicious foe from Matthew’s past, one whom no one expected to see again.

The show was commissioned by Zai Bennett, Managing Director of Content, Sky UK and Ireland, and Cameron Roach, Director of Drama, Sky Studios. Kara Manley is the executive producer for Sky. Made by Bad Wolf, A Discovery of Witches has been adapted for screen by Pete McTighe (Doctor Who) and Susie Conklin (The Musketeers), who are also executive producers. The co-founders of Bad Wolf, Jane Tranter and Julie Gardner, and Lachlan MacKinnon are executive producers along with Deborah Harkness and Farren Blackburn.

Farren Blackburn (The Innocents), Philippa Langdale (Harlots) and Jonathan Teplitzky (The Railway Man) are the directors. Filming took place in South Wales and on location in Oxford and Venice.
Posted by JD at 13:40

Email ThisBlogThis!Share to TwitterShare to FacebookShare to Pinterest
Labels: A Discovery of Witches