Maya Jama announced as host for third series of BBC Three’s Glow Up: Britain’s Next Make Up Star 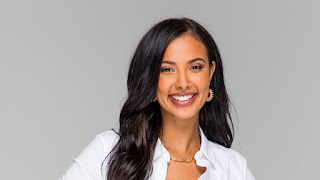 Maya Jama is confirmed as the new host of Glow Up: Britain's Next Make Up Star, when it returns for a third series later this year.

The former Radio 1 DJ has hosted an array of TV shows across BBC One, Channel 4, MTV and ITV, including the MOBO Awards, Stand Up To Cancer, and Save Our Summer with Peter Crouch. Make-up and fashion lover Maya is the perfect addition to TV's fiercest beauty squad.
Industry icons Val Garland and Dominic Skinner will also return as series judges, on hand to whittle ten budding Make Up Artists (MUAs) one by one, before discovering Britain's Next Make Up Star.
Previous series have been a huge hit for BBC Three, as the weekly challenges were replicated by legions of fans as they followed the competition by recreating their own looks via social media.
Some of the most revered names in the beauty and fashion industry have also appeared on the show, from Rankin, Henry Holland and Andrew Gallimore through to NikkieTutorials, Anastasia Soare and Lisa Armstrong.
Series three will be available to stream in the UK exclusively on BBC iPlayer later this year.
Maya Jama says: "I absolutely LOVE Glow Up and can't wait to join the family! I'm obsessed with makeup and creating different looks- it's going to be so much fun and I can't wait to see what the MUAs get up to."