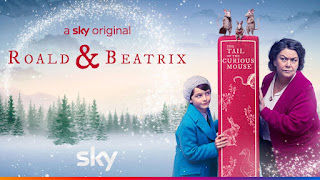 Sky original, Roald & Beatrix: The Tail Of The Curious Mouse, launched on Sky One with a 7 day cumulative audience of 3.12m, making it the biggest rating show of the Christmas period for Sky ever.


Sky One's festive schedule proved a hit with viewers, with Jack and the Beanstalk: After Ever After drawing in a cumulative audience of 1.77m to date which is up on the previous year's Cinderella: After Ever After and other shows such as A League of Their Own Christmas Special bringing in a strong audience of 1.6m.
Viewers also tuned into content on Sky Arts and Sky Comedy, as both channels reported their best ratings ever across New Year's Eve and New Year's Day respectively.
According to BARB data, 2020 is Sky's best Christmas ever (since 2002), as the Christmas Eve-Boxing Day period was up +29% YoY across the Sky Entertainment channels.
Roald & Beatrix: The Tail Of The Curious Mouse, is inspired by the true story of when a six-year old Roald Dahl set off on a big adventure to meet his favourite author, Beatrix Potter. It's a magical story of what can happen when you are brave enough to follow your dreams… The one-off Sky original has been described as "a beguiling Christmas treat" and "a charming festive story" by critics.
Critical Acclaim for Roald & Beatrix: The Tail Of The Curious Mouse
"A truly heart-warming tale" Daily Telegraph
"A charming festive story" Daily Mail Weekend
***** - Mail On Sunday
"A beguiling Christmas treat" Daily Telegraph
"One of the very best things on this Christmas" The Times
"Moving and magical" The Times
"A must watch" Spectator Life
Roald & Beatrix: The Tail Of The Curious Mouse is available on Sky On Demand and streaming service NOW TV.