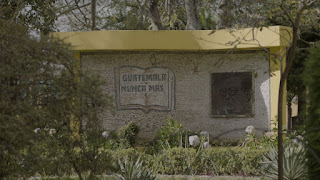 Based on Francisco Goldman's book of the same name and executive-produced by Academy Award winners George Clooney and Grant Heslov, The Art of Political Murder will premiere on Sky Documentaries on Tuesday 12 January at 21.00.
The film tells the story of the 1998 murder of Guatemalan human rights activist, Bishop Juan Gerardi - a murder that stunned a country ravaged by decades of political violence. Bishop Gerardi was found dead in his home just two days after presenting a damning report blaming the atrocities of the civil war on the Guatemalan military. In the murky world of post-war Guatemala, we follow the team of young investigators as they take on the case and begin to unravel a web of conspiracy and corruption, entangling the highest levels of government in their pursuit of the truth.
The Art of Political Murder is directed by Paul Taylor, produced by Teddy Leifer and Regina K. Scully and executive-produced by George Clooney and Grant Heslov.