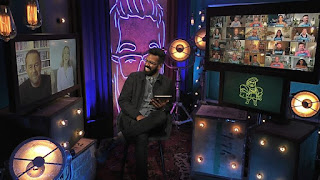 Romesh Ranganathan's Bafta-nominated topical comedy show The Ranganation (6x45') will return to BBC Two this February to bring a dose of optimistic entertainment to the nation.
Romesh has traded his garage in for a studio but will once again be joined virtually by his focus group, the Ranganation - 20 loveable, outspoken characters who represent a cross section of modern Britain.
Each week two celebrity guests will also be beamed into the studio to mull over the lighter end of the news spectrum alongside Romesh and the Ranganation. Previous guests have included Aisling Bea, Danny Dyer, Freddie Flintoff, Jo Brand, Katherine Ryan, Paloma Faith and Richard Osman.
Past discussions with members of the Ranganation such as Technophobe, Gen Z, Never Voted, Lord Dave and Romesh's Mum, have covered such disparate areas as paranormal activity, homeschooling during lockdown, dating apps, whether or not you should wash your legs in the shower, and of course Trousers Or No Trousers?
Romesh Ranganathan says: "Working with The Ranganation is always a highlight for me, so I'm looking forward to being virtually reunited with them all and unpicking the week's events together. We are also back in the studio, which is partly because we have figured out a way to do it safely but mainly because my marriage wouldn't have survived doing the show from my house again."
Shanthi Ranganathan added: "I am delighted to be back on screen soon with Rommy and The Ranganation, although Romesh still says that getting me up and running on Zoom is incredibly annoying! I am looking forward to regularly telling him what I think of his hosting."
Patrick Holland, Controller, BBC Two says: "For my money The Ranganation was the best lockdown comedy series on TV last year and I'm delighted that Romesh and his merry band are returning to our screens. The Ranganation are a unique cross-section of modern Britain and Romesh is a master at driving the most insightful and hilarious insights into contemporary life."