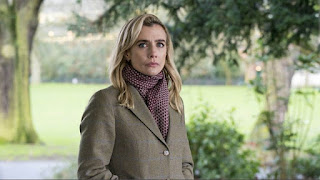 Lisa Dwan plays Tori Matthews in Bloodlands.
Tell us about Tori Matthews.
Tori Matthews is a bright and friendly doctor who has returned to Belfast after living several years abroad to look after her ailing mother. She begins teaching at Queen's University, where she runs into to Tom's daughter. She is smart, inquisitive and resourceful with a painful past.
What was filming in Belfast like?
I adored filming in Belfast, I would go back there in a heartbeat. There were moments when filming up the Mourne Mountains or on Strangford Lough where the beauty would just catch your breath. The unit very quickly became like a family and all the cast and crew couldn't have been kinder.
Working and living in Belfast as everyone knows is so spoiling, it's impossible to feel lonely as everyone wants to talk to you and there are so many fabulous places to eat. There is such a sense of rightful pride that people have that they are always keen to show you 'their' Belfast. I have never enjoyed a location more.
What was working with James Nesbitt and the rest of the cast like?
James is one of the most generous actors I've ever worked with and is so passionate on and off the screen about this project that it really set the tone for the rest of us.
Did you do any specific preparation for the role?
I had to do a Belfast accent which I had very little experience of prior to my arrival. The production kindly set me up with a brilliant voice coach and from the moment I landed I began speaking in the accent as much as possible.
Did you find any scenes particularly challenging or memorable to film?
Jimmy and I had a series of very intense filming days up the Mourne Mountains. And I remember one day filming in a snow blizzard, having to make our way to set by jeep as the cars couldn't make it up the mountain. Once I sat back into the car after a take and Lola Petticrew burst into a fit of giggles as I looked like an extra from [disaster movie] Alive, there were little mounds of snow caked over my lashes and my lips were blue!
Why do you think crime dramas hold so much appeal?
The thing about a well-crafted crime drama is that it provides the audience a purchase in the story to wonder and piece together what is happening, so one feels personally invested in the story as it unfolds. Chris Brandon is an extraordinary talent. From the moment I opened the script I was no longer just interested in my own characters plot but I totally gripped by the whole story. I feel immensely proud to be part of this.