Helena Bonham Carter and David Mitchell join the stellar cast for The Cleaner, written by and starring Greg Davies 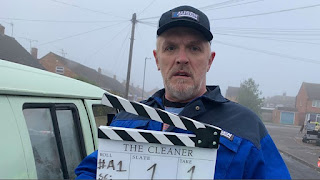 The cast for The Cleaner includes: Helena Bonham Carter (The Crown), David Mitchell (Upstart Crow, Back), Stephanie Cole (Still Open All Hours), Donald Sumpter (Game Of Thrones), Shobu Kapoor (Four Weddings And A Funeral), Ruth Madeley (Years And Years), Layton Williams (Everybody's Talking About Jamie musical), Zita Sattar (Casualty), Georgie Glen (The Crown, Call The Midwife), Bill Skinner (Ted Lasso) and Esmonde Cole (Still So Awkward).
Written by and starring Greg Davies, The Cleaner follows Paul 'Wicky' Wickstead, a state-certified cleaning technician with a very special field of work - he is a crime-scene cleaner responsible for the removal of any signs of death.
Armed with chemicals, scrubbing brushes and cleaning rags, Wicky removes the gruesome mess at the scene of the crime. When carrying out his duties, he stumbles across the strangest of people, from the victim's relatives, employers, neighbours and acquaintances to occasionally even the murderers themselves. And because he's a sociable type, he sometimes gossips more than he cleans…
Greg Davies says: "I'm thrilled that this remarkable collection of actors has agreed to appear next to me on screen. Scrubbing up blood in a hazmat suit in front of them will be a pleasure."