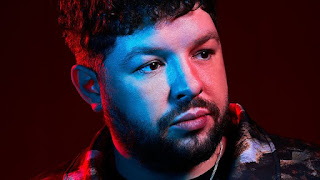 James Newman has been confirmed as the artist representing the United Kingdom at the Eurovision Song Contest 2021 after the competition was postponed in 2020 because of the COVID-19 pandemic. The 65th Eurovision Song Contest will be held in Rotterdam, The Netherlands in May 2021, and the United Kingdom song will be revealed in March 2021.
James Newman is a hugely successful BRIT Award-winning and Grammy-nominated songwriter. James won a BRIT for British Single of the Year for Waiting All Night, performed by Rudimental and Ella Eyre. He has also written hit singles Lay It All On Me performed by Rudimental ft Ed Sheeran, Blame performed by Calvin Harris ft. John Newman, and Therapy, performed by Armin Van Buuren and James Newman. Last year James co-wrote My Last Breath with acclaimed British songwriters Ed Drewett, Iain James and Adam Argyle which was the song entered by the UK in last year's competition before it was postponed. James released his debut EP The Things We Do in Summer 2020 and ended the year with another new collaboration with Armin Van Buuren, Slow Lane.
The BBC also announces the renewed collaboration between BBC Studios and music company BMG for this year's contest. The song will be released and published by BMG, and BBC Studios will once again produce the BBC's coverage of the biggest and most watched song competition in the world.
James Newman says: "I'm so excited and honoured to be getting a second chance at representing my country in the Eurovision Song Contest. I haven't stopped making new music in lockdown and I can't wait for everyone to hear the song I'm taking to Eurovision in 2021."
The Eurovision Song Contest Grand Final will take place on Saturday 22 May in Rotterdam, The Netherlands, and will be broadcast live on BBC One with commentary by Graham Norton; and live on BBC Radio 2 with commentary from Ken Bruce. Ken Bruce will be also be previewing Eurovision on his Radio 2 show from 9.30am-12 noon on Friday 21 May. The semi-finals will be held on Tuesday 18 & Thursday 20 May, broadcast live on BBC Four.
As one of the Big Five countries (United Kingdom, Spain, Germany, France, Italy), the United Kingdom does not have to qualify from the semi-final stage of the competition and will gain automatic access to the Saturday Grand Final. The Netherlands, as the incumbent champion, will also not need to qualify from the semi-final stage and will gain automatic entry to the Grand Final.