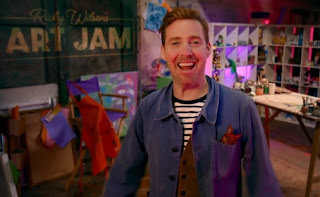 Kaiser Chiefs frontman Ricky Wilson is to switch the microphone for a paintbrush in new CBBC show, Ricky Wilson's Art Jam.
Each episode sees the former art teacher invite a celebrity friend into his art studio to chat about their lives and art passions. Bringing with them three treasured objects, the celebrities will tell Ricky the stories and meaning behind them which he then uses as inspiration to create a stunning, bespoke piece of art just for them.
Famous faces joining Ricky for Ricky Wilson's Art Jam include former Girls Aloud star Nadine Coyle, Radio 1 DJ Nick Grimshaw, YouTuber Joe Sugg, TV presenter Kem Cetinay alongside a host of other athletes, social media stars and TV personalities.
Ricky will also take viewers around the UK on a tour of street art, museums and art galleries, highlighting some of the artists and creators that have inspired him. Ricky will also show his celebrity pals some of the amazing art work CBBC viewers have sent in for the show.
Ricky says: "Art was my favourite subject at school and I'm excited to 'don' my Art Jam apron and create some artwork for my celebrity friends, and of course show the CBBC viewers how simple it is to transform anything into a special and unique piece of art."


Lockdown Learning is available on CBBC, BBC Two, BBC Bitesize, BBC iPlayer and the Red Button.
Ricky Wilson's Art Jam launches on CBBC at 11am on Monday 1 March with all episodes available on BBC iPlayer that day.