That Peter Crouch Podcast is #BackStronger for Series 5 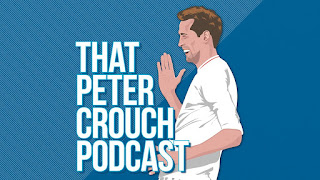 The most popular BBC Sounds podcast of 2020, BBC Radio 5 Live's That Peter Crouch Podcast is back for its fifth series.
With new episodes to be released weekly, Peter Crouch, Chris Stark and Tom Fordyce will return on Wednesday 17th February for episode one of the new series.
After ending series four at Buckingham Palace in the company of Prince William, Crouchy and the boys are bringing your favourite podcast back for an extended run.
New episodes will either centre around a topic within football, or welcome a high profile guest from the footballing world. During the series, there will also be some shorter, mini-episodes only available on BBC Sounds.
What will remain the same though, whether the boys are in the company of royalty or just amongst themselves, is the hilarious absurdity of the conversation.
Peter Crouch says: "This series, we'll be focusing on the fundamentals of football - and we all know there'll be some magnificently strange twists along the way too. I can't wait to get recording again with Chris and Tom. It's a great bit of escapism for me and hopefully the nation too, as we come back stronger and continue through the pandemic together."