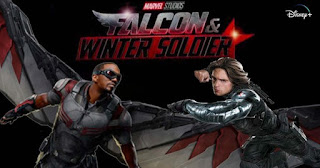 After being handed the mantle of Captain America at the end of Avengers: Endgame (2019), Sam Wilson teams up with Bucky Barnes in a worldwide adventure that puts their abilities to the test as they fight the anarchist group the Flag-Smashers.

The Falcon and The Winter Soldier is scheduled to premiere on March 19, 2021, and will consist of six episodes. It will be part of Phase Four of the MCU.

Email ThisBlogThis!Share to TwitterShare to FacebookShare to Pinterest
Labels: The Falcon and The Winter Soldier