The Mezzotint, a ghost story for Christmas from M. R. James and Mark Gatiss, is announced 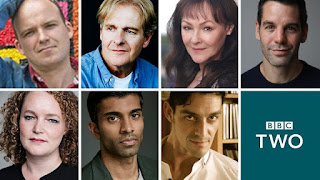 BBC Two and BBC iPlayer have announced The Mezzotint, a ghost story for Christmas based on the M. R. James short story and adapted for television by Mark Gatiss. The haunting standalone drama is made by Can Do Productions and Adorable Media, and will air this December.
"For sale: Interesting mezzotint: View of a manor-house, early part of last century."
It's 1922 and in the heart of an old English college, Edward Williams receives an engraving of an unknown country house. An imposing facade. A sweeping lawn. And, just perhaps, something else…?
Laced with M. R. James' trademark terror, The Mezzotint will guarantee a chill in the air for viewers this Christmas.
Rory Kinnear (Years & Years, No Time To Die) stars as Williams, alongside Robert Bathurst (Cold Feet, Downton Abbey) as Garwood, and Frances Barber (Doctor Who, Semi-Detached) as Mrs Ambrigail. The Mezzotint also stars John Hopkins (Poldark, Lucky Man), Emma Cunniffe (Roadkill, Unforgotten), Nikesh Patel (Four Weddings and a Funeral, Indian Summers), and Tommaso Di Vincenzo (Dracula).


The Mezzotint is the latest ghost story for Christmas from Mark Gatiss on the BBC, following Martin's Close in 2019, The Dead Room in 2018, The Tractate Middoth in 2013, and Crooked House in 2008. All were a ratings hit, with Martin's Close becoming BBC Four's most watched programme of 2019, with 1.5 million viewers (30-day consolidated figure).
Mark Gatiss says: "It's delightful to be bringing a little seasonal unease to the nation once again and this famous M. R. James story is just the ticket. We've assembled a top-notch team to bring this eerie mystery - and a certain enigmatic old picture - to life."
Filming wrapped recently in the South of England. The Mezzotint will air this Christmas on BBC Two and BBC iPlayer.