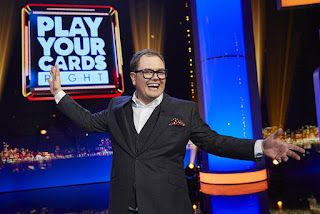 The hit series of classic gameshow reboots will return to ITV and ITV Hub on Saturday 3 April at 8:35pm, including new addition Name That Tune
Alan Carr's Epic Gameshow, the extravaganza of nostalgic and exciting gameshow reboots, returns to brighten up Saturday nights on 3rd April at 8:35pm on ITV and ITV Hub.
Once again hosted by inimitable funnyman Alan Carr, the 11 x 60' series from Talkback, a Fremantle label, will launch with a celebrity special of the legendary Play Your Cards Right. The big-name couples vying to win the jackpot for their charity of choice include Harry & Sandra Redknapp, Nicola Adams & Ella Baig, Martin & Shirlie Kemp and Catherine Tyldesley & Tom Pitfield.
This will be followed week-by-week with the return of all the UK's favourite gameshows from the first series, with contestants from the general public taking on The Price is Right, Take Your Pick, Strike It Lucky, Bullseye and Play Your Cards Right. However, this time a set of plucky contestants will also put their musical knowledge to the test on new addition and beloved classic, Name That Tune.
This initial run of eight episodes concludes with another celebrity special and will then be followed by three more specials to air later in the year. Throughout all eleven nail-biting shows filled with family fun, contestants will be hoping to win big-money or top-of-the-range prizes, as they battle to get to those all-new epic endgames.
Alan Carr said: "I am so super-excited to be back with my Epic Game show, frankly its nice to be just out the house, but to start the run with 'Celebrity Play Your Cards Right' is just what we need right now. A perfect storm of nostalgia, family fun and with the chance to win 30,000 pounds for charity - I dare you not to be on the end of your sofas shouting Higher and Lower!"
Harry Redknapp said: "Play Your Cards Right is an absolute TV classic. We are so looking forward to appearing on the show, I don't think it's any secret that I can be a little competitive so Sandra and I are definitely going to be trying our best to win something for my charity, that's for sure."
Nicola Adams said: "The first series of Epic Gameshow was such a great, feel-good show for Saturday nights, and Alan's such a brilliant host. I'm thrilled that Play Your Cards Right has been brought back and Ella and I got a chance to try our luck."
Katie Rawcliffe, Head of Entertainment Commissioning at ITV, said: "Epic Gameshow is the only series that puts all of the nation's best loved game shows on one studio floor, and with an exciting mix of nostalgia, big money prizes, and of course Alan Carr at the helm, it's Saturday night TV at its best."
Jonno Richards, Managing Director of Talkback, a Fremantle label, said: "It's great to be bringing Epic Gameshow back to Saturday nights, with a fantastic line-up of shows, some big-name talent to kick us off and most importantly, the brilliant Alan Carr running the show. It's going to be Epic!"